Jamie Benn net worth: Jamie Benn is a Canadian professional hockey player who has a net worth of $30 million. Jamie Benn was born in Victoria, British Columbia, Canada in July 1989. He is a left winger who shoots left handed. Benn played for the Peninsula Panthers in the VIJHL and for the Victoria Salsa and the Victoria Grizzlies in the BCHL.

He was drafted #129 overall in the 2007 National Hockey League Draft by the Dallas Stars. He began played for the Stars in 2009 and has also played for the Kelowna Rockets of the WHL and the Hamburg Freezers of the DEL. Jamie Benn was selected to the NHL All-Star Game in 2012 and 2016. He won the Art Ross Trophy in 2014-15 and was a First All-Star Team member in 2013-14 and 2015-16. Benn has won Gold medals representing Canada at the 2014 Winter Olympics and the 2009 World Junior Championships. In 2016 Jamie Benn signed an 8-year, $76 million contract with the Dallas Stars that came with a $56 million signing bonus. The entire contract is fully guaranteed and pays an average annual salary of $9.5 million. 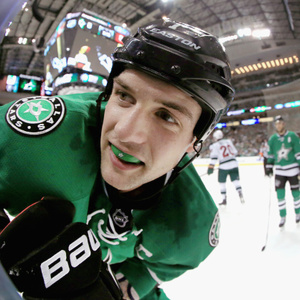