James van Riemsdyk is a left winger who played at Christian Brothers Academy High School and the University of New Hampshire. He was drafted #2 by the Philadelphia Flyers in the 2007 National Hockey League Draft. Van Riemsdyk played for the Flyers from 2009 to 2012 and has played for the Toronto Maple Leafs since 2012. He also represents the United States in international competition and won a Gold Medal at the 2006 Under-18 championship and a Silver in 2007. He won a Bronze Medal at the 2007 World Junior Championships. Van Riemsdyk played in the 2014 Olympics. He was named to the World Junior All-Star Team in 2008 and was the NHL Rookie of the Month in November 2009. In 2011 he signed a six year deal for $25.5 million. 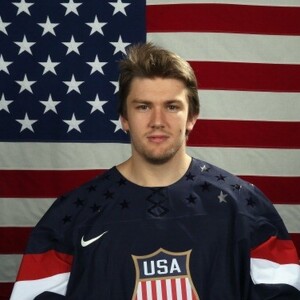