Ilya Kovalchuk net worth and salary: Ilya Kovalchuk is a Russian professional ice hockey player who has a net worth of $60 million. Ilya Valeryevich Kovalchuk was born in Kalinin, Russian SFSR, Soviet Union in April 1983. He played for two seasons for the Russian Super League club Spartak Moscow. In 2000 he was drafted by the Cape Breton Screaming Eagles. He was then drafted as the #1 pick in the 2001 NFL Entry Draft by the Atlanta Thrashers. He played with the Thrashers for eight seasons and then was traded to the New Jersey Devils in 2010. Kovalchuk signed a 15 year $100 million contract. After 11 seasons in the NHL he retired in 2013. During the 2012-2013 lockout season Ilya signed with SKA Saint Petersburg of the KHL. He played in Russia and was named captain of the team. He played in the KHL All Star Game as the captain of the Western Conference. After retiring from the NHL he signed a four year contract with SKA St. Petersburg. Kovalchuk is a left winger and has also played internationally for Russia. He won gold medals in the 2008 and 2009 World Championships. In 2002 he won a bronze at the Winter Olympics. In the NHL he was a three time All-Star and he won the Maurice "Rocket" Richard Trophy for being the league's top goal-scorer. He set new records in the 2011-12 season for most Shootout Goals in a season and most Game-deciding Shootout Goals in a season. In 2018 Ilya signed a three-year deal with the Los Angeles Kings that came with a $6.3 million average annual salary. 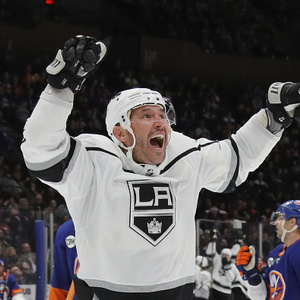