Henrik Sedin net worth: Henrik Sedin is a Swedish professional hockey player who has a net worth of $40 million dollars. Henrik Sedin was born in Ornskoldsvik, Sweden in September 1980. He and his twin brother Daniel Sedin both play for the Vancouver Canucks of the National Hockey League. Henrik started his hockey career with Modo Hockey in the Swedish Elite League in 1997.

He and his brother Daniel won the 1999 Golden Puck for being the Swedish players of the year. Henrik was the #3 pick in the 1999 NHL Entry Draft by the Canucks and he has spent his entire career there. His brother Daniel was the #2 pick. Henrik has won three Cyrus H. McLean Trophies for being the team's highest point-scorer. He won a Cyclone Taylor Award for being the team's MVP in 2010. Henrik won the Hart Memorial Trophy for being the NHL's most valuable player in 2009-10. In 2010-11 he was selected to the NHL First All-Star Team. He has been to the Stanley Cup Finals but his team lost to the Boston Bruins in seven games. Henrik and his brother Daniel have also been awarded the Victoria Scholarship for being the Swedish athletes of the year. He competes for Sweden in international competition. Henrik helped lead the country to a gold medal in the 2006 Winter Olympics in Turin. He has won the world title and two bronze medals at the IIHF World Championships. He is married to his wife Johanna and the couple has two sons together. The couple owns horse races and their horse Nahar won the 2013 Elitloppet. 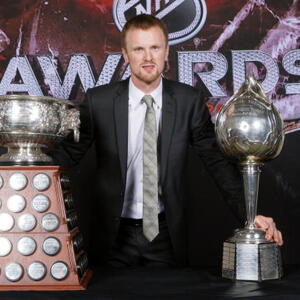