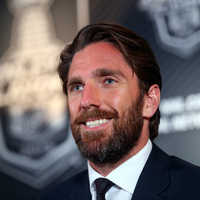 Henrik Lundqvist Net Worth: Henrik Lundqvist is a Swedish professional ice hockey player who has a net worth of $35 million. Born in Are, Sweden, in 1982, Henrik Lundqvist began his professional hockey career overseas. The New York Rangers drafted him with the 205th overall pick during the 2000 NHL Entry Draft. He made his NHL debut on October 8, 2005 with the Rangers against the New Jersey Devils. He has played every game of his NHL career with the Rangers as of the fall of 2014. Lundqvist won the Vezina Trophy in 2012 for the first time; he had been previously nominated in 2006, 2007, and 2008, and again in 2013. Lundqvist has appeared in three NHL All-Star games in 2009, 2011, and 2012, and won the Victoria Cup and the John Halligan Good Guy Award in 2008. He's been named the MVP of the Rangers seven times between 2007 and 2013. He holds several records, including most shutouts ever recorded by a goalie in Madison Square Garden. He is the Rangers' record holder for most wins by a goalie, most shutouts by a goalie, and most playoff wins by a goalie. Lundqvist plays internationally for Sweden and has won a handful of gold medicals, including one at the 2006 Winter Olympics in Turin. Lundqvist and Sweden took silver at the 2014 Winter Olympics in Sochi. Lundqvist, nicknamed King Henrik, is active off the ice. He landed on the "People" magazine list of the 100 most beautiful people in the world in 2006 and used to play guitar in the Swedish band Box Play. Lundqvist and his wife, Therese, have one daughter together.