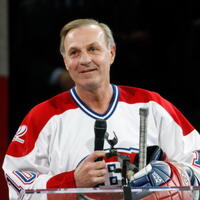 Guy Lafleur net worth: Guy Lafleur was a Canadian professional hockey player who had a net worth of $10 million. Guy Lafleur died on April 22, 2022 at the age of 70.

Lafleur was the #1 overall pick by the Montreal Canadiens in the 1971 National Hockey League Draft. He played for the Canadiens from 1971 to 1985. Lafleur finished his career playing for the New York Rangers from 1988 to 1989 and for the Quebec Nordiques from 1989 to 1991. He also represented Canada in international competition in 1976 and 1981.

Lafleur became the first player in the NHL to ever score 50 goals and 100 points in six consecutive seasons. During his 17 season career Lafleur won five Stanley Cup Championships. Over his career he also won three Art Ross Trophies, three Lester B. Pearson Awards, two Hart Memorial Trophies, and a Conn Smythe Trophy. In 1988 Lafleur was inducted in the Hockey Hall of Fame. He was inducted into the Canadian Sports Hall of Fame in 1996. In honor of him the Guy Lafleur Award of Excellence was introduced in 1985. Upon retiring Guy operated a helicopter rental company and owned a restaurant.