Evgeni Malkin net worth and salary: Evgeni Malkin is a Russian professional ice hockey player who has a net worth of $50 million. Evgeni Malkin earned this net worth through his professional hockey salaries. Born Evgeni Vladimirovich "Geno" Malkin on July 31, 1986, in now Russia's Magnitogorsk, he is the ice hockey center and alternate captain for the Pittsburgh Penguins of the National Hockey League (NHL).

Malkin made his Russian Superleague debut in the 2003–04 season as a 17-year-old, and then followed his international debut for Russia during the 2003 U-18 World Championships. After his professional kick-off in Russia, Malkin was Chosen second overall in the 2004 NHL Draft by the Pittsburgh Penguins. However, due to an international transfer dispute his start in the NHL was delayed until 2006-07 season, in which he seized the Calder Memorial Trophy as the league's best rookie. His second season saw him assisting Pittsburgh to the 2008 Stanley Cup Final series, and also he turned out to be a runner-up for the Hart Memorial Trophy, league's MVP award. The next season, he fetched the Art Ross Trophy and the Conn Smythe Trophy, as well as again finished runner-up for the Hart Trophy; while together with the Penguins, he won the Stanley Cup championship. For the second time he earned the Art Ross Trophy, won after the 2011–12 season, for which Malkin was named the Hart Memorial Trophy winner as the league's MVP. As for the 2012–13 season, he signed with the Kontinental Hockey League's Metallurg Magnitogorsk. Despite competing for Russia in seven IIHF World U20 Championships (three as junior and four as senior), he has racked up the bronze medals in two other World Championships and has played for the Russian team in the last two Winter Olympic Games, held in Turin and Vancouver. All of his triumphs combined with his ability to make plays acquired him a reputation as one of the best players in the NHL. 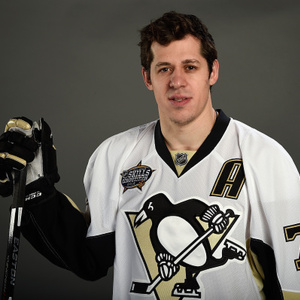