Eric Staal Net Worth: Eric Staal is a Canadian professional ice hockey player who has a net worth of $38 million. Born in Thunder Bay, Ontario, Canada, in 1984, Eric Staal was originally drafted into the Ontario Hockey League in 2000. Three years later, the Carolina Hurricanes chose him second overall during the 2003 NHL Entry Draft and he jumped into the team's lineup immediately.

He played with the Hurricanes' minor league affiliate during the 2004-05 lockout and returned to the big club with a bang during the 2005-06 season, scoring 100 points. Staal and the Hurricanes went on to win the Stanley Cup that season. He has played in four NHL All-Star games in 2007, 2008, 2009, and 2011. He was the 2007-08 All-Star Game MVP. Staal has captained the Hurricanes since early 2010 after replacing Rod Brind'Amour. He plays for the Canadian men's national team, winning a gold medal at the 2007 World Championships in Moscow and a silver at the 2008 World Championships in Halifax and Quebec City. Staal earned a gold medal at the 2010 Olympic Winter Games in Vancouver. He has been married to his wife, Tanya Van den Broeke, since 2007. They have two children together, sons named Parker and Levi. 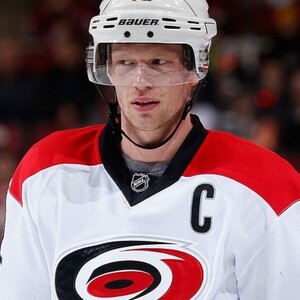