Eric Lindros net worth: Eric Lindros is a Canadian retired professional hockey player who has a net worth of $30 million dollars. Eric Bryan Lindros was born in London, Ontario, Canada in February 1973. He played junior hockey for the Oshawa Generals in the Ontario Hockey League. Before his time in the NHL Lindros won a Memorial Cup with his team, the Red Tilson Trophy for most outstanding player, and won the CHL Player of the Year.

Lindros was the #1 pick in the 1991 NHL Draft by the Quebec Nordiques. He refused to play for Quebec and as traded to the Philadelphia Flyers in 1992. In the NHL he averaged better than a point per game. He had frequent concussions and missed a lot of time due to injuries. He won the Hart Memorial Trophy and Lester B. Pearson Award for his play in 1994-95. Lindros played for the Flyers until 2000 and then played for the New York Rangers from 2001 to 2004. In 2005-06 he played for the Toronto Maple Leafs and in 2006-07 for the Dallas Stars. He was selected as an NHL All-Star seven times. Lindros also played for the Canadian national team. He won gold medals at the 1990 and 1991 World Junior Championships. He won a gold medal with Canada at the 2002 Olympics, and a silver in 1992. In 2007 he officially retired. 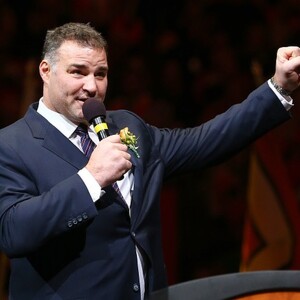