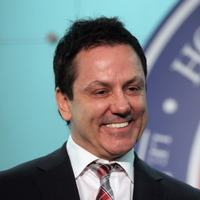 Doug Gilmour net worth: Doug Gilmour is a Canadian hockey general manager and former professional hockey player who has a net worth of $13 million. Doug Gilmour was born in Kingston, Ontario, Canada in June 1963. He was a center who was drafted #134 overall by the St. Louis Blues in the 1982 NFL Draft. Gilmour played for the Blues from 1983 to 1988. He played for the Calgary Flames from 1988 to 1991 and then played for the Toronto Maple Leafs until 1996-97. Gilmour also played for the New Jersey Devils, the Chicago Blackhawks, the Buffalo Sabres, and the Montreal Canadiens. He finished his career with the Toronto Maple Leafs. Gilmour represented Canada in international competition and won a gold medal at the 1987 Canada Cup. He won a Stanley Cup championship in 1982 and played in the NHL All-Star Game in 1993 and 1994. Gilmour's #93 was retired by the Toronto Maple Leafs and he was inducted into the Hockey Hall of Fame in 2011. He would go on to coach and then become the general manager of the Kingston Frontenacs in the Ontario Hockey League.