He turned professional and signed with the Boston Bruins of the National Hockey League in 1965. Sanderson also played for the Philadelphia Blazers, New York Rangers, St. Louis Blues, Vancouver Canucks, and Pittsburgh Penguins. During his career he won a Memorial Cup championship in 1965. He won the Eddie Powers Memorial Trophy for top scorer in the OHA in 1967, the Calder Memorial Trophy, and the Prince of Wales Trophy. Sanderson won a Stanley Cup championship in both 1970 and 1972. He won the Eddie Shore Trophy and 7th Player Award in 1972. He made many bad investments and lost millions of dollars during his career. Sanderson battled substance abuse and ended up penniless and sleeping on a park bench. He was helped by Bobby Orr and entered rehab. Sanderson is now the Managing Director of The Sports Group in Boston, Massachusetts. 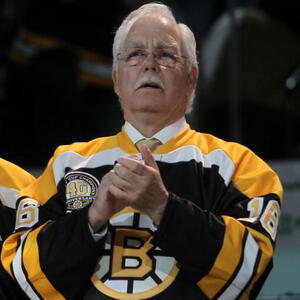