Darren McCarty net worth and salary: Darren McCarty is a Canadian Hockey player who has a net worth of $500 thousand. Born in Burnaby, British Columbia, Canada, Darren McCarty grew up playing hockey. He began his professional career in the early 90s, when the Detroit Red Wings drafted him. He played very successfully with the Red Wings for eleven seasons, including leading them to their first Stanley Cup in over 40 years.

During his hockey career, McCarty earned over $15 million in salary and endorsements but unfortunately due to some bad business decisions was bankrupt a few years into retirement. In his filing he claimed he was $6 million in debt to various creditors. After the Red Wings let him go, following restructuring of salary caps in the NHL, he signed with the Calgary Flames, but parted company with the team after only two seasons. He played briefly for the Flint Generals in the International Hockey League, and then one more season with the Detroit Red Wings, before announcing his retirement in the winter of 2009. He has since served as a commentator and attempted to live a quieter life. He recently made headlines, when he and his wife filed protection orders against a hard partying group of former friends who have been harassing them for some months. 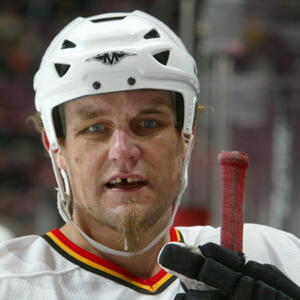