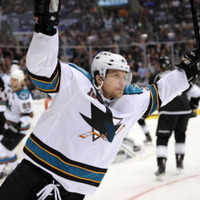 Dany Heatley Net Worth: Dany Heatley is a Canadian professional hockey player who has a net worth of $40 million. Dany Heatley was born in Freiburg, West Germany in January 1981. He first played for the Wisconsin Badgers in the WCHA. During that time he made the All-WCHA Rookie Team, First Team, and was WCHA Rookie of the Year AHCA West First-Team All-American. Heatley was drafted #2 by the Atlanta Thrashers in the 2000 NHL Draft. In 2002 he won the Calder Memorial Trophy for top rookie. Heatley was traded to the Ottawa Senators after he requested the trade for being responsible for a car accident that killed one of his teammates and close friends. He signed a three year deal worth $13.5 million with the Senators. He would later sign a six year deal worth $45 million. Heatley was traded to the San Jose Sharks in 2009 and made $8 million. He was again traded to the Minnesota Wild in 2011 and then signed a one year deal worth $1 million with the Anaheim Ducks in 2014. Heatley has been named to the NHL All-Star Game in 2003, 2007, 2008, and 2009 and was the MVP in 2003. In 2007 he was a First NHL All-Star Team selection. Representing Canada in international competition he has won Gold at the 2010 Winter Olympics, 2003 and 2004 World Championships, and at the 2004 World Cup of Hockey.