In 1997 Alfredsson signed a $14 million deal for four years with the Senators. In 2008 he agreed to a four year extension worth $21.6 million. Alfredsson joined the Detroit Red Wings in 2013 and signed a one year deal worth $5.5 million He was selected to the NHL All-Rookie Team and won the Calder Memorial Trophy in 1996. Alfredsson was selected to the NHL All-Star Game in 1996, 1997, 1998, 2004, 2008, and 2012. He won the Guy Carbonneau Award for Top Penalty-Killer in 2008, the King Clancy Memorial Trophy in 2012, and the Mark Messier Leadership Award in 2013. Daniel holds Senators records for regular season goals, games played, points, and assists. He represents Sweden in international competition and won a Gold at the 2006 Winter Olympics and Silvers at the 2014 Winter Olympics, 1995 World Championships, and 2004 World Championships. 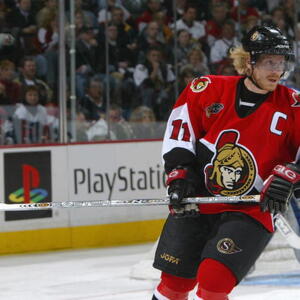