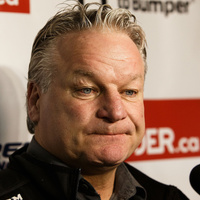 Dale Hunter Net Worth: Dale Hunter is a Canadian former professional ice hockey player and former coach who has a net worth of $8 million. Dale Hunter was born July 31, 1960 in Petrolia, Ontario, Canada. He is best known as the former head coach of the Washington Capitals of the National Hockey League. During his NHL playing career, he was selected 41st overall by the Quebec Nordiques in the 1979 NHL Entry Draft and played seven seasons in Quebec. Hunter was traded to the Washington Capitals along with Clint Malarchuk in return for two players and a 1987 first-round draft pick the Nordiques then used to select Joe Sakic. He went on to play for the Washington Capitals and the Colorado Avalanche. His playing career spanned 1980-1999. Hunter's career overall has been with riddled with almost equal shares of accolades and controversy. He amassed a staggering 3565 penalty minutes, putting him in possession of the record for the second-most penalty minutes in NHL history after Dave "Tiger" Williams (although Hunter played 1,407 games to Williams' 962). When the Capitals retired Hunter's No. 32 jersey, he was presented with the penalty box from the demolished Capital Centre at the retirement ceremony. Hunter is the only NHL player ever to score over 1,000 points and rack up over 3,000 penalty minutes (1,020 points and 3,565 PIMs over 1,407 NHL games). Over his playing career he was repeatedly suspended and fined for everything from ice abuse to criticizing officials. In July 2006, Hunter was arrested and charged with a DUI. The charges were dropped when the presiding judge ruled that his rights under the Canadian Charter of Rights and Freedoms were violated for unlawful detention and being denied his right to have a lawyer.