He played for the Midget AAA Gatineau Intrepides and for the Moncton Wildcats of the Quebec Major Junior Hockey League. He made his NHL debut for the Blackhawks in 2006 and has played in Chicago his entire professional career. As a member of the Chicago Blackhawks he has won Stanley Cup Championships in 2010, 2013, and 2015. Crawford was named to the NHL All-Rookie Team in 2010-11 and won the William M. Jennings Trophy in 2012-13 and 2014-15. In 2015 he played in the NHL All-Star Game. Crawford signed a three year deal for $8 million in 2011. In 2013 he signed a six year deal for $36 million. 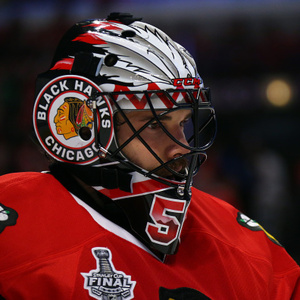