What is Connor McDavid's Net Worth?

Connor McDavid is a Canadian professional hockey player who has a net worth of $30 million. Connor McDavid is a center who shoots left handed. McDavid competed for the Toronto Marlboros of the Greater Toronto Hockey League. He played for the Erie Otters of the Ontario Hockey League from 2012 to 2015. McDavid was the #1 overall pick by the Edmonton Oilers in the 2015 National Hockey League Draft and has played his entire NHL career for the Oilers. He was awarded the Art Ross Trophy for being the league's top scorer in his second season. McDavid also won the Ted Lindsay Award for being the league's most outstanding player and the Hart Memorial Trophy for being his team's most valuable player. McDavid was named NHL First All-Star Team in 2017. He has also represented Canada in international competition and won gold at the IIHF World Under-18 Championship, IIHF World Under-20 Championship, and IIHF World Championship.

Connor McDavid was born on January 13, 1997 in Richmond Hill, Ontario, Canada. His parents, Kelly and Brian, were both athletic and encouraged their son to begin playing hockey at the age of three in the family basement. At the age of four, he began playing organized youth hockey with five year old. His parents had to lie about his age in order to make it possible to play. When he was six, he enrolled in an Aurora, Ontario hockey program where he became a star player. While there, he helped the team win for Ontario Minor Hockey Association championships.

In 2011, at the age of 14, he began playing for the Toronto Marlboros of the Greater Toronto Hockey League. That season, he won the league's Player of the Year award. He contemplated playing NCAA Division I Hockey at the collegiate level but instead decided to enter the junior ice hockey circuit as an adolescent. Because he was so young, at age 15, he had to apply for exceptional player status through Hockey Canada in order to be allowed to enter the junior hockey draft. He was granted such status and joined the Erie Otters in 2012.

After several successful seasons with the Otters, McDavid was selected as first overall in the 2015 NHL Entry Draft by the Edmonton Oilers, an NHL team. He signed a three-year entry-level contract with the team valued at over $11 million. His first season, 2015-2016, was successful though he did sustain an injury midway through the season.

His successful rookie season led to McDavid being named the Oilers captain for the 2016-2017 season when McDavid was only 19 years old. He became the youngest captain in NHL history. McDavid recorded his first NHL hat-trick on November 19 in a game against the Dallas Stars. He went on to have an extremely successful season, becoming the first player to reach 50 points during the season. Only five days later, he recorded his 100th NHL point. His success led him to being selected for the NHL All-Star Game in 2017. By the end of the season, McDavid was honored at the 2017 NHL Awards with the Hart Memorial Trophy for the most valuable player in the NHL, as well as the Ted Lindsay Award for the most outstanding player as decided by the National Hockey League Players' Association.

In July of 2017, McDavid signed an eight-year contract extension valued at $100 million, which went into effect at the beginning of the 2018-2019 season. While the season proved successful for McDavid personally, it was not as successful for the Oilers as a team. The general manager was fired midway through the season with Ken Holland replacing. 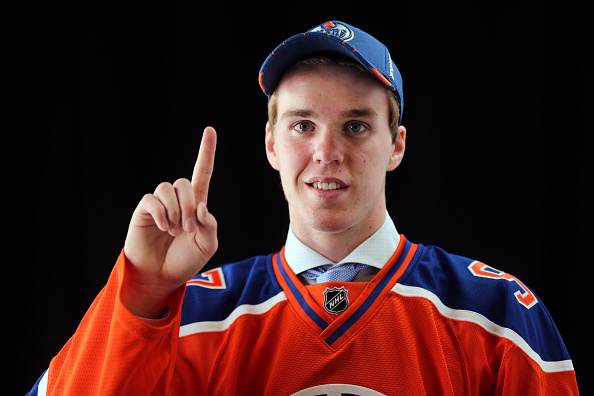 McDavid began the 2019-2020 season as the NHL First Star of the Week. He started the season off strong but ultimately the entire season was suspended by the NHL due to the COVID-19 pandemic. When the NHL did return to play in July of 2020, McDavid was one of only 31 players that the Oilers decided to take into their quarantine bubble, as not all players could play in order to reduce the risk of infection. McDavid went on to have a successful conclusion to the season, including a postseason hat-trick. However, the Oilers were ultimately eliminated by the Chicago Blackhawks in the postseason. McDavid also well personally in the 2020-2021 season, though the Oilers were swept by the Winnipeg Jets in the first round of the 2021 Stanley Cup playoffs. McDavid began the 2021-2022 season with a 17-game point streak, one of the longest point streaks to begin a season in NHL history.

In addition to NHL play, McDavid also plays on the Canadian hockey team in various international hockey competitions and tournament's. McDavid was featured as the cover athlete on the video game "NHL 18" in 2018. His unique skating style also inspired a new technology featured in "NHL 19," in which a player's size and other physical attributes affect their skating speed and power. McDavid is considered to be one of the best players in NHL history and has been given the nickname "McJesus" by his teammates and fans.

McDavid is dating interior designer Lauren Kyle. Kyle designed the house that the couple lives in in Edmonton. The home was featured in a video for "Architectural Digest" and also was in "EDify" magazine. McDavid is a fan of the Toronto Blue Jays and threw out the ceremonial first pitch at a Blue Jays game in 2016. In 2022, McDavid was featured on boxes of the cereal Cheerios as part of their "Be the Cheer" promotion. The same year, McDavid became a brand ambassador for the sports betting company, BetMGM.

McDavid has devoted both his fame and money to various philanthropic causes. He is heavily involved with the indigenous community of Edmonton and has raised money to help create more opportunities in sports for indigenous children. He has also been involved in efforts that provide assistance to sick children.