Claude Giroux net worth: Claude Giroux is a Canadian professional hockey player who has a net worth of $16 million. Claude Giroux was born in Hearst, Ontario, Canada in January 1988. He played right wing from 2007 to 2011 and has played center since 2011. Giroux started off playing for the Cumberland Barons of the ODMHA and the Cumberland Grads of the CJHL.

He played for the Gatineau Olympiques of the QMJHL and the Philadelphia Phantoms of the AHL. Giroux was drafted #22 by the Philadelphia Flyers in the 2006 NHL Draft. He has played for Philadelphia since 2008 and also played for Eisbaren Berlin of the DEL from 2012 to 2013. He helped the Olympiques win the President's Cup in 2008 and Giroux won the Guy Lafleur Trophy as playoff MVP. He has also represented Canada in international competition and won a Gold Medal at the 2008 World Junior Ice Hockey Championships. He was the Flyers' top point-scorer in 2010-11, 2011-12, and 2013-14. Giroux became Philadelphia's captain at the beginning of the 2012-13 season. He played in the NHL All-Star Game in 2011, 2012, and 2015. In 2013 Giroux signed an eight year deal with the Flyers for $66.2 million. He also won a Gold Medal at the 2015 World Championships for Canada. 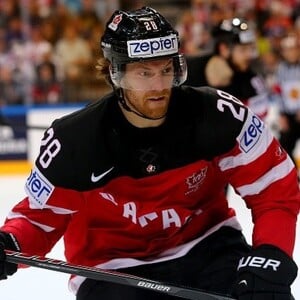