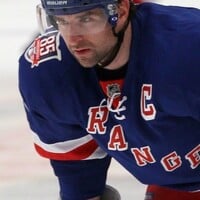 Chris Drury Net Worth: Chris Drury is an American retired professional hockey player who has a net worth of $44 million. Chris Drury was born in Trumbull, Connecticut in August 1976. Drury won the Little League Baseball World Series Championship with his hometown team. He played for four seasons as Boston University where he won the Hobey Baker Award and was a First-Team All-American. Drury was drafted #72 by the Quebec Nordiques in the 1994 NHL Draft. He played for the Calgary Flames in the 2002-03 season and the Buffalo Sabres from 2005 to 2007. In 2007 Drury signed with the New York Rangers for a five year deal worth $35.25 million. He retired as a player in 2011. He won the Stanley Cup championship with the Colorado Avalanche in 2001 and also won a Calder Trophy. Drury was captain of the Sabres and Rangers. He holds records at Boston University for being the only player to have at least 100 goals and assists and for most goals in school history at 113. Competing internationally for the United States Drury won Silver medals at the 2002 and 2010 Winter Olympics and a Bronze at the 2004 World Championships.