Bryan Trottier net worth: Bryan Trottier is a Canadian American former professional hockey player who has a net worth of $5 million. He is best known for winning six total Stanley Cups with the Islanders and the Penguins. During his career, Bryan earned a total of $2.12 million in salary. That's the same as around $4.2 million in today's dollars.

Bryan Trottier was born in Val Marie, Saskatchewan, Canada in July 1956. He was a centre who played for the Swift Current Broncos and the Lethbridge Broncos in the WCJHL. Trottier was drafted by the New York Islanders of the NHL and the Cincinnati Stingers of the WHA in 1974. He played for the Islanders from 1975 to 1990 and then for the Pittsburgh Penguins from 1990 to 1994. Bryan Trottier represented both the United States and Canada in international competition. He was named one of the 100 Greatest NHL Players in history in 2017 after becoming an assistant coach for the Buffalo Sabres in 2014. Trottier won the Stanley Cup with the Islanders in 1980, 1981, 1982, and 1983 and with the Penguins in 1991 and 1992 as well as with the Colorado Avalanche as an assistant coach in 2001. He was selected to nine NHL All-Star Games and won the Calder Memorial Trophy, Art Ross Trophy, Hart Memorial Trophy, Conn Smythe Trophy, and King Clancy Memorial Trophy and was inducted into Canada's Sports Hall of Fame. 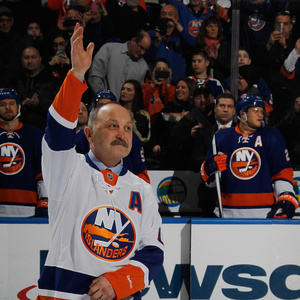