Brian Rolston Net Worth: Brian Rolston is a retired American professional ice hockey player who has a net worth of $36 million. Brian Rolston was born in Flint, Michigan, in 1973, and played college hockey at Lake Superior State University, where he guided his team to a National Championship win and Most Outstanding Player honors.

The New Jersey Devils chose him with the eleventh overall pick during the 1991 NHL Entry Draft. The six-foot-two, 214-pound forward played with the Devils, the Colorado Avalanche, the Boston Bruins, the Minnesota Wild, and the New York Islanders. He played in one NHL All-Star Game in 2007 and was part of the 1995 New Jersey Devils' Stanley Cup championship-winning team. He played internationally for the United States' men's national team, and won a bronze medal at the 1996 World Championships in Vienna and a silver medal at the Winter Olympics in Salt Lake City in 2002. Rolston became famous for his use of the slap shot during unconventional moments in games, including shootouts and while taking penalty shots. After he retired, "Sports Illustrated" ranked Rolston's slap shot as the eighth best shot of all-time in 2013. He finished his NHL career on April 30, 2013, after playing in 1,256 games. 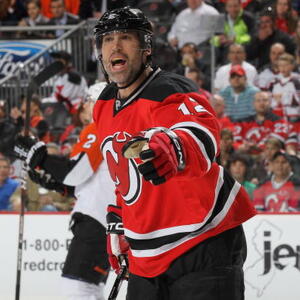