Brad Richards Net Worth and salary: Brad Richards is a retired Canadian professional hockey player who has a net worth of $45 million. Brad Richards was born in Murray Harbour, Prince Edward Island, Canada in May 1980. Brad played for the Notre Dame Hounds in the SJHL and Rimouski Oceanic in the QMJHL.

He was drafted #64 by the Tampa Bay Lightning in the 1998 NHL Draft. During the 2004-05 NHL lockout Richards played in the Russian Super League for Ak Bars Kazan. He signed a five year $39 million deal with the Lightning in 2006. In 2008 Richards was traded to the Dallas Stars. He signed as a free agent with the New York Rangers in 2011 for a nine year deal worth $58.5 million. He was bought out by the Rangers in 2014 and signed a one year deal worth $2 million with the Chicago Blackhawks. Richards was the CHL Player of the Year and won the MVP and Playoff MVP Awards in the QMJHL. In the NHL he was selected to the NHL All-Rookie Team. He won the Stanley Cup in 2004 with the Lightning and won the Conn Smythe Trophy for Most Valuable Player of the 2004 Stanley Cup Playoffs. The same year he won the NHL Lady Byng Trophy for Sportsmanship. Richards played in his only NHL All-Star Game in the 2010-11 season. Competing internationally for Canada Richards won Gold at the 2004 World Cup of Hockey. He scored his first NHL hat trick in April 2013. 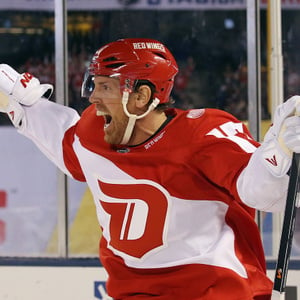