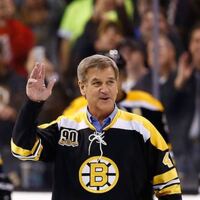 What is Bobby Orr's net worth and salary?

Bobby Orr is a retired Canadian ice hockey player who has a net worth of $5 million dollars. Bobby should be much richer but he was reportedly swindled by a one-time agent. The financial upheaval reportedly left Orr highly in debt and nearly bankrupt.

Having played in the NHL for 12 seasons, first with the Boston Bruins and then with the Chicago Black Hawks, he helped revolutionize the defenseman position. Orr has won a record eight Norris Trophies in a row, as well as three consecutive Hart Trophies as the most valuable player in the league.

Bobby Orr was born in 1948 in Parry Sound, Ontario, Canada. His mother was Arva, and his father, Doug, had served in the Royal Canadian Navy during World War II. Orr is one of five siblings. From an early age, he was already demonstrating his hockey skills. A year after receiving his first skates, at the age of five, he played organized hockey in the "minor squirt" division. First playing as a forward, and then as a defense, Orr's performances in Ontario provincial competitions eventually drew the notice of NHL scouts. At age 14, Orr joined the Oshawa Generals, a junior hockey affiliate of the Boston Bruins. During this time, Orr moved to Oshawa, where he attended R. S. McLaughlin High School and boarded with a local family. Every year during his junior career, Orr's goal and point totals increased, resulting in him being named to the OHA First-All Star team.

When Orr turned 16, his father Doug asked the Bruins for more money, but was turned down. Doug subsequently met with Toronto lawyer Alan Eagleson to help out; Eagleson agreed to work with the family for free, and developed a close relationship with Orr. After several offers were made, Orr and the Bruins agreed on a $25,000 signing bonus and a two-year contract that made Orr, at the time, the highest-paid player in league history as a rookie.

Career with the Bruins

Orr joined the Bruins for his first professional season in 1966-1967. During this season, Orr scored 13 goals and made 28 assists, and won the Calder Memorial Trophy as the outstanding rookie of the league. For his second season, Orr played only 46 games due to several injuries. Although he couldn't finish the season, he won his first of a record eight consecutive Norris Trophies, and was named to the NHL's First All-Star team. The next season, despite still struggling with injuries, he scored 21 goals and totaled 64 points, a new single-season record for a defenseman. In the 1969-1970 season, Orr almost made a league record by scoring 120 points, and won his first of three consecutive Hart Trophies. He went on to lead the Bruins through the 1970 playoffs by scoring nine goals and 11 assists. This victory march culminated in May, when Orr scored one of the most famous goals in hockey history, winning Boston its first Stanley Cup since 1941.

The next season, the Bruins broke numerous records. Orr finished second in the league with 139 points, and set a record for points in a season by a defenseman. After signing a new five-year contract in 1971 – the first million-dollar contract in NHL history – Orr again came in second in points with 117. The following year, he led the Bruins once again to the Stanley Cup, winning against New York. For the 1973-1974 season, Orr led the team to another first-place finish, and made it to the Stanley Cup final, ultimately losing to Philadelphia. During the following season, Orr broke his own record for goals scored by a defenseman with 46. Orr had his final season in 1975-1976, but had to leave due to a knee injury. 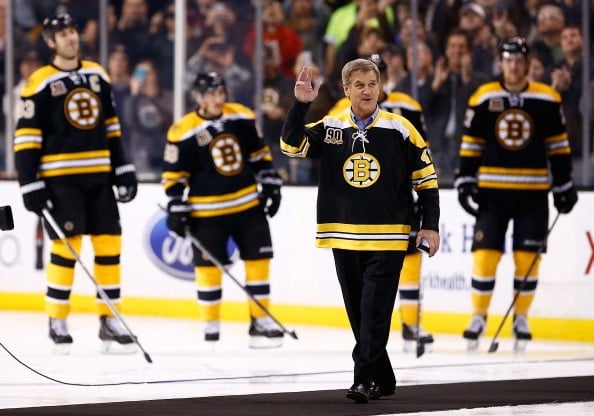 After briefly becoming a free agent, Orr signed a five-year $3 million contract with the Chicago Black Hawks in 1976. The team gave Orr permission to play in the 1976 Canada Cup tournament for Team Canada; although his knee was still bad, his performance resulted in him being named the tournament's MVP. However, his injuries prevented him from playing full-time while on the Black Hawks. He had to sit out the entire 1977-1978 season, and only played six games in 1978-1979. In 1978, he scored his final NHL goal against Detroit at Olympia Stadium.

Upon retiring, Orr had scored 270 goals and made 645 assists, totaling 915 points across 657 games. At the time, he was the leading defenseman in terms of goals, assists, and points. Subsequently, the Hockey Hall of Fame waived its usual three-year waiting period in order to induct Orr at the age of only 31, making him the youngest living player to be inducted.

Following his NHL playing career, Orr briefly served as an assistant coach for the Black Hawks, and was a consultant to the Hartford Whalers. Later, he moved back to the Boston area and established Can-Am Enterprises with Paul Shanley and Tom Kelly. In 1996, Orr became an agent representing hockey players. He purchased the Woolf Associates agency, and, along with Rick Curran and partner Paul Krepelka, incorporated the agency as Orr Hockey Group.

Since his retirement, Orr has done numerous ceremonial first puck drops for the Bruins. In 2013, he released an autobiography entitled "Orr: My Story," which debuted in the top ten on The New York Times' nonfiction bestsellers list.

In 1973, Orr married speech therapist Margaret Wood; they have two sons, Darren and Brent. Orr is also the grandfather of Alexis and Robert.

Among his myriad personal interests, Orr is passionate about fishing, something he's been doing since childhood. While living with Bruins trainer and roommate John Forristall, Orr was also known for keeping his apartment clean, and abstaining from drinking, smoking, and nightlife clubbing.