Bobby Hull net worth and salary: Bobby Hull is a Canadian former professional hockey player who has a net worth of $10 million dollars. Bobby Hull was born in Pointe Anne, Ontario, Canada, and made a name for himself playing hockey as a teenager. He led his Junior B team, the Woodstock Warriors, to an upset victory at the 1955 Sutherland Cup. He began his NHL career when he was 18, playing for the Chicago Black Hawks. He quickly distinguished himself as a professional player as well, and led the league in goal and point scoring by his third season. He became the first player to score more than 50 goals in a single season in 1966, and his slapshot was clocked at 95 miles per hour. He left the NHL for the rival hockey league, the WHA in 1972, playing for the Winnipeg Jets. He and his former teammate, Stan Mikita, are the men behind the practice of curving hockey stick blades. He was made an Officer of the Order of Canada in 1978 and retired in 1981. 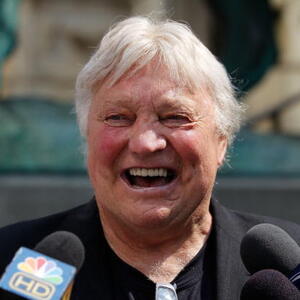