Barry Melrose net worth and salary: Barry Melrose is a former player and head coach in the National Hockey League who has a net worth of $16 million. Melrose began his hockey career as a defenseman with the Kamloops Chiefs in 1974. He was chosen 36th overall in the NHL Draft in 1976, and during his career, played for the Cincinnati Stingers, Winnipeg Jets, Toronto Maple Leafs, and the Detroit Red Wings.

Upon retiring from hockey in 1987, he immediately began coaching. He coached several teams and brought them to final championship games. He took the Medicine Hat Tigers of the WHL to the Memorial Cup, the Red Wings to the Calder Cup in 1992, and the Los Angeles Kings to the 1993 Stanley Cup Final. After the Stanley Cup Final game, he started working with ESPN as a hockey analyst and spent the next 13 years working on NHL Tonight and DCI Tonight. After his time with ESPN in 2011, Melrose joined the NHL Network as a contributor and he continues to work there today. Melrose resides in Glen Falls, New York with his wife, Cindy, and the couple has two grown sons, Tyrell and Adrien. He became an American citizen in March 1998, and in addition to his various roles in hockey, he has also had several minor television and movie roles. 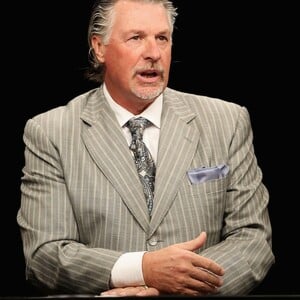