Alex Kovalev Net Worth: Alex Kovalev is a Russian retired professional hockey player who has a net worth of $43 million. Alex Kovalev was born in Togliatti, Russian SFSR, Soviet Union in February 1973. Kovalev played for HC Dynamo Moscow in the USSR and CIS. He was drafted #15 by the New York Rangers in the 1991 NHL Draft. Kovalev was traded to the Pittsburgh Penguins in 1998. He was traded back to the Rangers in 2003 and then to the Montreal Canadiens in 2004. In 2005 he signed a four year deal worth $4.5 million a year with Montreal. In 2009 Alex signed a two year deal worth $10 million with the Ottawa Senators. In 2011 he was traded to the Pittsburgh Penguins and in 2013 he signed a one year deal for $1 million with the Florida Panthers. During his career Kovalev was selected to the NHL All-Star Game in 2001, 2003, and 2009. He was the NHL All-Star Game MVP in 2009. Kovalev won a Stanley Cup championship with the New York Rangers in 1994. In 2008 he won The Hockey News – Saku Koivu Award for comeback player of the year. Kovalev was the first Russian player to be drafted in the first round and to have his name engraved on the Stanley Cup. Alexei retired from hockey in July 2014. He also competed internationally for Russia and won Gold medals at the 1992 Winter Olympics and the 1992 World Junior Championships. 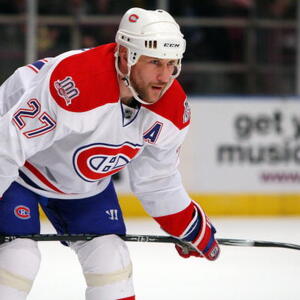