Alexander Ovechkin Net Worth and Salary: Alexander Ovechkin is a Russian born hockey star who has a net worth of $80 million. Also known simply as "Ovi," Alexander is widely considered one of the best ice hockey players in history. He currently plays for the Washington Capitals, and he serves as the captain of the team. Ovechkin started his career in the Russian Superleague while playing for Dynamo Moscow. After four seasons in Russia, he moved to the NHL.

After being drafted by the Capitals in 2004, he began playing in North America during the 2005-2006 season. His first season was tremendous, and the Russian scored 52 goals and 54 assists. Unsurprisingly, he finished as the Rookie of the Year. He also has nine Maurice Richard Trophies to his name, which are awarded each year to the NHL's top scorer. Other honors include the Hart Memorial Trophy, the Lester B. Pearson Award, and First All-Star Team selections.

Although Alexander's scoring record began to slow down, he went through a resurgence in 2013, once again claiming the Richard Trophy and the Hart Trophy. This sparked a new surge of high performance from Ovechkin that continued into the next three years. In 2018, Alexander won the Stanley Cup with the Capitals for the first time. In 2020, he surpassed 700 career goals.

Early Life: Alexander Mikhailovich Ovechkin was born on September 17th of 1985 in Moscow, Russia (formerly the Soviet Union). Alexander was raised into a family of athletes, and both of his parents had competed at a high level. His mother was a two-time Olympic gold medalist in basketball, and his father had played football. His mother immediately saw Alexander's potential when he picked up a hockey stick for the first time at the age of two.

Alexander enrolled at Dynamo Moscow's sport school from an early age and engaged in daily training sessions. At the age of 10, Ovechkin lost his elder brother, who passed away after complications from a car accident. One of Alexander's goal celebrations involves kissing his glove and pointing to a sky in honor of his brother. At age 11, he was scoring over 55 goals per season in the Dynamo Moscow system. During this time, he first started to develop a goal of reaching the NHL – where he believed the highest quality hockey was being played.

Career: At age 16, Ovechkin made his debut in the Russian Super League for Dynamo Moscow. He spent three seasons in Russia before being drafted into the NHL, during which he scored 36 goals and recorded 32 assists. In 2004, Alexander was selected first overall by the Washington Capitals during the draft.  However, he played for Moscow Dynamo for one more season as a result of the 2004-2005 NHL lockout. During this period, he racked up 27 points despite missing two months due to a shoulder injury. He also began playing for Russia's national team at this point.

During his first NHL game, Ovechkin scored two goals. Not long afterward, he was scoring his first hat trick. This first season also saw Alexander scoring what would later be described simply as "The Goal" against the Phoenix Coyotes. Many observers believed it was the best goal they had ever seen. Needless to say, his rookie season was incredible. He was named NHL's best rookie, and he scored 52 goals in total.

Over the next period, Ovechkin continued to win a number of awards and honors. He also helped the Capitals reach the playoffs a number of times. In 2010, he was named the team captain. He also developed a reputation for suspensions. The 2017-2018 season was probably his best (despite his advancing age), as he led the Capitals to their (and his) first Stanley Cup against the Vegas Golden Knights. Previously, Alexander had been called the greatest hockey player to never win a Stanley Cup. After this achievement, Ovechkin continued to set numerous records over the next few years.

Real Estate: In 2012, it was reported that Alex Ovechkin has purchased a home in McLean, Virginia for $4.2 million. The residence boasts 5 bedrooms and over 11,000 square feet of living space. Constructed just one year prior to the purchase, the home sits on more than an acre of land. Notable features include a mahogany deck and a cherry-paneled elevator.

Relationships: Alexander was once engaged to the famous tennis player Maria Kirilenko. The pair called off the wedding and the entire relationship in 2014. Just one year later, he announced that he was engaged to Nastya Shubskaya. Shubskaya is the daughter of famed Soviet director and actress Vera Glagoleva. The pair married soon after becoming engaged, and in 2018 they welcomed their first child into the world. Shubskaya and Ovechkin had their second child in 2020.

Controversy: Ovechkin caused considerable controversy after an intense and long-standing feud with Evgeni Malkin, a forward who plays for the Pittsburgh Penguins (as of 2021). The pair are both Russian, and they were even described as friends at one point. However, an incident that allegedly involved Ovechkin punching Malkin's agent at a nightclub caused a permanent rift between them.

On the ice, Ovechkin seemingly tried to injure Malkin, aiming devastating hits at his Russian countryman. In many cases, Malkin was barely able to duck out of the way and escape injury. However, tensions appeared to relax when the pair appeared together during the 2009 SuperSkills Competition and seemed to be jovial with one another. One report stated that a third Russian player, Ilya Kovalchuk, helped the pair get over their differences. 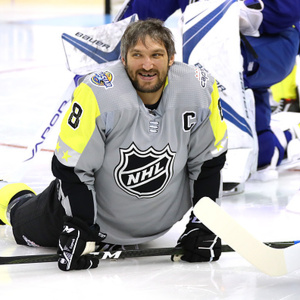