Aaron Johnson net worth: Aaron Johnson is a Canadian professional ice hockey player who has a net worth of $5 million. He is currently under contract with the Ottawa Senators in the National Hockey League but has also played for the Blue Jackets, the New York Islanders, the Chicago Blackhawks, the Calgary Flames, the Edmonton Oilers, and the Boston Brewers.

He was a member of the Memorial Cup champion Rimouski Oceanic in 2000 and was a third-round selection of the Columbus Blue Jackets at the 2001 NHL Entry Draft. He made his NHL debut in 2003 with the Blue Jackets and earned his first NHL point with an assist against the Nashville Predators. He spent the majority of the following two seasons with the American Hockey League team, the Syracuse Crunch, but appeared with the Blue Jackets for 26 games before earning a regular role with the team. Johnson left the Blue Jackets as a free agent and signed with the New York Islanders in the 2007-08 season. A year later, after suffering a knee injury and going again as a free agent, he signed with the Chicago Blackhawks for the 2008-09 season with whom he appeared in 35 games. Chicago traded him to the Calgary Flames in 2009 and in 2010 he was sent to the Edmonton Oilers. He left the Oilers and instead played for the American Hockey League team, the Milwaukee Admirals before returning to the Blue Jackets for the 2011-12 season. Following a ten-game stint with the Boston Bruins in 2012-13, he signed with the New York Rangers for the 2013-14 season. On July 3, 2014, Johnson left the Rangers organization and agreed to a one-year contract as a free agent with he Ottawa Senators. Aaron Johnson married his wife, Courtney, in August of 2013. 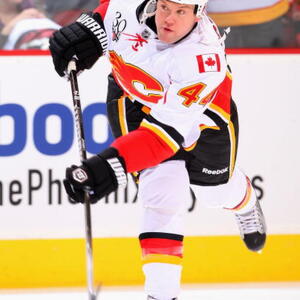