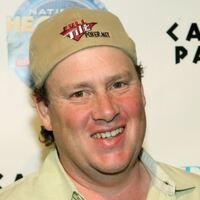 Gavin Smith net worth: Gavin Smith was a Canadian professional poker player who had a net worth of $3 million. Gavin Smith was born in September 1968 in Guelph, Ontario, Canada and passed away in January 2019. In 2005 he won the World Poker Tour's Season IV Mirage Poker Showdown Championship worth $1,128,278 and was named the WPT Season IV Player of the Year. Smith won the $2,500 Mixed Hold'em event at the 2010 World Series of Poker to take home a bracelet and $268,238. In 2004 he finished 52nd at the World Series of Poker Main Event. Smith won the Big August Rec. Gambling Excursion in 2004 and he won the World Pro-Am Challenge in 2006 for $500 thousand. He was a Full Tilt Pro and hosted The Circuit radio show. He also co-starred on the TV series Prop Bets. Gavin Smith passed away on January 14, 2009 at 50 years old from natural causes.