Frankie Dettori net worth: Frankie Dettori is an Italian horse jockey who has a net worth of $18 million. Frankie Dettori was born in Milan, Italy on December 15, 1970. Dettori's first experience was a horse was with a Palomino pony is father bought him at the age of 12. His first win came in Turin in November 1986 when he was 16 years old.

As a teenager, he won over 100 races. On September 28, 1996, he achieved the rare feat of winning all seven races on Ascot Racecourse. In 2000 he received an honorary MBE. He was the retained rider for the Godolphin racing stables up through September 2012. In December 2012, Frankie Dettori was suspended from racing for six months due to taking an illegal substance; during this absence from racing, he participated in the 11th season of the UK version of "Big Brother," finishing seventh. For his career, Frankie Dettori has ridden over 500 winning horses. He's won the British flat racing Champion Jockey award three times: in 1994, 1995 and 2004. He's also won every major British Classic race: St. Leger five times, Epsom Oaks and 1,000 Guineas three times apiece, 2,000 Guineas twice and the Epsom Derby once. 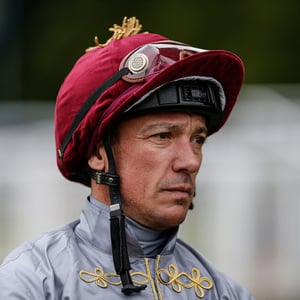