Felix Baumgartner net worth – Felix Baumgartner is an Austrian daredevil who has a net worth of $5 million dollars. Born in 1969 in Salzburg, Austria, Felix Baumgartner has said he'd dreamed about being a daredevil and skydiving since his childhood. He holds several world records, including those for skydiving at about 843 miles per hour, for the lowest BASE jump and for the highest parachute jump after leaping off the Petronas Towers in Malaysia. In 2012, he became the first known person to break the sound barrier without any vehicular power. That same year, he rode a helium balloon from the stratosphere back down to Earth. Baumgartner picked up some of his skills while with the Austrian military. He was one of "Top Gear" Magazine's Men of the Year in 2012 and the Laureus World Action Sportsperson of the Year in 2013. Baumgartner is known for formerly dating the German Playmate of the Century, Glitta Sax, and eventually ending his engagement to model Nicole Ottl. 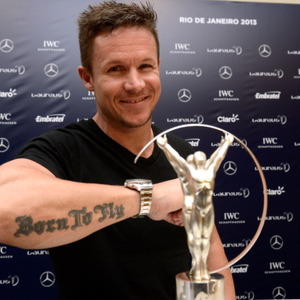