Dick Vitale Net Worth and salary: Dick Vitale is an American basketball sportscaster and former head coach of NBA and college teams who has a net worth of $20 million dollars. For 40 years, he served as an ESPN college basketball broadcaster, and became known for his unique catchphrases and energetic, colorful commentary. Vitale has also authored a number of books, and has appeared in movies.

Early Life and Career Beginnings: Dick Vitale was born in 1939 in Passaic, New Jersey, and was raised in Garfield. His father, John, worked as a clothing press operator and security guard, while his mother, Mae, did factory work as a seamstress. As a teenager, Vitale attended East Rutherford High School, and then went to college at Seton Hall University, where he earned a bachelor of science degree in business administration. Later, he graduated with a master's degree in education from William Paterson University.

In 1958, Vitale had his first job as a coach at a Garfield, New Jersey elementary school. He eventually moved up to the high school level, and became the head coach at Garfield High School for one season. Later, he coached at his alma mater of East Rutherford High School, ultimately leading his teams to two New Jersey state championships. From 1964 to 1971, his record at the school was 131-47.

College and NBA Coaching: In 1971, Vitale became an assistant coach at Rutgers University, working under head coach Dick Lloyd. After he did two seasons at the school, he was hired to be the head coach at the University of Detroit. In 1977, Vitale took that school to the 32-team NCAA tournament. His record with Detroit was 78-30, which included a 21-game winning streak during the '77 season. Following that successful season, Vitale was promoted to the position of the university's athletic director.

Vitale graduated to the professional leagues in 1978. For the '78-'79 season, he coached the NBA's Detroit Pistons, ultimately bringing them to a 30-52 record. However, at the end of 1979 during a rough start for the team, Pistons owner Bill Davidson alerted Vitale that the team had decided to make a coaching change.

A Start in Broadcasting: After leaving his position as coach of the Pistons, Vitale was given his first television gig by Scotty Connal at the then nascent ESPN network. Although hesitant to accept, Vitale ended up taking the job on the premise that he would do it temporarily until he could land another coaching job. In December of 1979, he called ESPN's first college basketball game alongside play-by-play partner Joe Boyle; the game saw DePaul University defeat Wisconsin 90-77.

Initially, Vitale did not adapt easily to the broadcasting world. Among other things, he missed his first production meeting in Chicago, and often talked over commercials and play-by-plays. Still, his employers believed in him. Vitale started to understand his skill and impact when, during the 1983 Final Four, numerous fans came asking for his autograph. 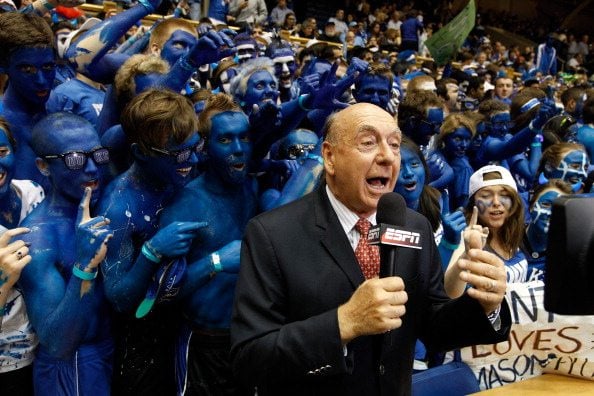 Continued Broadcasting Success: In 1985, the American Broadcasting Company, or ABC, purchased ESPN; as a result, Vitale started doing broadcasts for that network. Among other notable achievements, Vitale had covered every televised game between Duke and the University of North Carolina from 1979 to 2015. By the 2004-2005 season, Vitale was calling around 40 games a year. Additionally, in 2002, he called a prep game between Oak Hill Academy and St. Vincent-St. Mary's, which at the time featured future NBA all-star LeBron James.

In 2009, along with Canadian sportscaster Dan Shulman, Vitale called his first televised NBA game since the 1984 playoffs; the match was between the Miami Heat and the Denver Nuggets. That year was a major one for Vitale, as it marked the year he had called around 1,000 games. As a color commentator, he is usually paired with play-by-play announcer Mike Patrick for ACC games, and with Dan Shulman for both Saturday primetime and other non-ACC games. For the postseason, Vitale serves as an in-studio analyst alongside host Rece Davis. Over the years, he has been paired with such big names as Roger Twibell, Brent Musburger, Jim Simpson, Mike Tirico, and Brad Nessler.

Other Media Appearances: Vitale has done much work outside of sports broadcasting. In 1994, he provided his voice and likeness to the Sega Genesis video game "Dick Vitale's 'Awesome, Baby!' College Hoops." Later, he lent his voice to EA Sports' "NCAA Basketball" video game series. Vitale has also done many product endorsements, appearing in commercials for such brands as DiGiorno, Oberto, GEICO, Hooters, and Taco Bell. Meanwhile, he has shown up in a number of films, usually playing himself as a sports commentator. His movie credits include "The Naked Gun: From the Files of Police Squad!," "Blue Chips," "Jury Duty," "He Got Game," "Love & Basketball," and "Home of the Giants."

Vitale is also a fairly prolific author. He released his first book, "Vitale," in 1988. Subsequent titles include "Time Out Baby!," "Dickie V's Top 40 All-Everything Teams," "Holding Court: Reflections on the Game I Love," "Campus Chaos," and "The Lost Season." In 2004, he released an autobiography, cowritten with Dick Weiss, called "Living a Dream." The book includes thoughts on Vitale's experiences with ESPN and the Pistons, as well as his memories of former coach Jim Valvano.

Personal Life: Vitale has been married to Lorraine McGrath since 1971. The pair has two daughters, Sherri and Terri, who have given them five grandchildren. Among Vitale's favorite non-NBA teams are the Rays, Lightning, and Buccaneers, all from Tampa Bay. 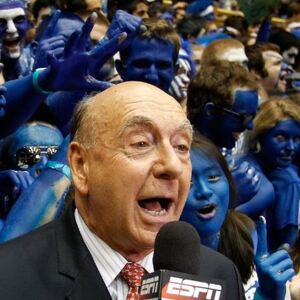