Dan Wheldon net worth: Dan Wheldon was an English racing driver who had a net worth of $15 million. Wheldon was born on June 22, 1978 in Emberton, Olney, England, and died on October 16, 2011 at the age of 33. Wheldon got into kart racing at the age of four, and raced in several circuits around England, moving to the United States in 1999.

Wheldon continued to race in open-wheeled circuits, winning the U.S. F2000 National Championship in 1999 before joining the IRL IndyCar Series in 2002. He joined Andretti Green Racing the following year and won Rookie of the Year honors. Dan Wheldon won his first IRL race in 2004 at Twin Ring Motegi in Japan. In 2006 he won the 24 Hours of Daytona. Wheldon is probably best known for being the 2005 Indy Racing League IndyCar Series champion, and also winning the Indy 500 in both 2005 and 2011. Wheldon died during lap 11 of the IZOD IndyCar World Championship at Las Vegas Motor Speedway when he was involved in a 15-car accident that sent his car airborne. Since his death, the Dan Wheldon International Driver Trophy has been given to the best performing international driver over the race weekend of the Australian V8 Supercars Gold Coast 600. 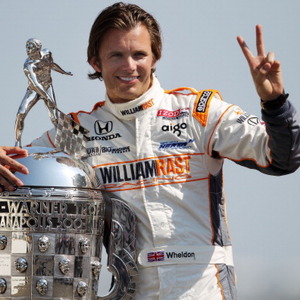