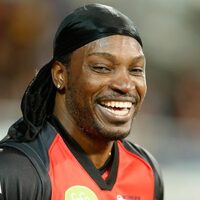 Chris Gayle net worth: Chris Gayle is a Jamaican cricketer who has a net worth of $25 million. Chris Gayle has earned his net worth as an international cricket player for the West Indies. He was also the captain of the West Indies' Test side from 2007 to 2010. He was born on September 21, 1979 in Kingston, Jamaica; he is currently contracted with the Royal Challenger Bangalore in the Indian Premier League (IPL) as well as the Sydney Thunder in the Big Bash League. He plays domestic cricket for Jamaica and he is one of only four players who have scored two triple centuries at Test level: 317 against South Africa in 2005, and 333 against Sri Lanka in 2010. Gayle has been a cricketer since 1998 and has also represented Worcestershire, the Western Warriors and the Kolkata Knight Riders. Before making his first-class debut for Jamaica at 19, Gayle played for the West Indies at youth international level. In a Twenty 20 International he holds the record for the highest innings he scored 117 against South Africa in the first match of the 2007 World Twenty20. In 2009 he received criticism about his commitment for arriving very late for his second IPL competition, an away Test series against England. During his career with the Royal Challenger Bangalore he has been very instrumental in many victories and received five man of the match awards for his performances. Gayle has been involved in a few controversies, even though he has been considered a calm and cool cricket play; he was involved in a dispute over sponsorship issues in 2005 between the West Indies Cricket Board, and several of the players. Also at the 2005 October's Champions Trophy tournament which was held in India, he was fined 30 percent of his match fee for repeated verbal exchanges between him and Australian batsman Michael Clarke. He is also known for receiving an official reprimand and warning, during the 2007 tour of England for his public display of criticism against the West Indies Cricket Board.