Andrew Flintoff Net Worth: Andrew Flintoff is an English professional cricketer that plays for Lancashire County Cricket Club and who has a net worth of $20 million dollars. Andrew Flintoff was born December 6, 1977 in Preston, Lancashire, England. A tall fast bowler, batsman and slip fielder, Flintoff was consistently rated by the ICC as being among the top international all rounders in both ODI and Test cricket. Following his debut in 1998, he became an integral player for England, serving as both captain and vice-captain of the team. However, he suffered regular injuries throughout his international career, often due to his heavy frame and bowling action. During the period 2007–09 he played in only 13 of England's 36 Test matches, but nevertheless remained a core member of the England squad, being selected whenever available. On July 15, 2009 he announced his retirement from Test cricket at the conclusion of the 2009 Ashes series, on August 24th, and although he made himself available for future commitments in One Day International and Twenty20 International matches, it was reported on September 7, 2009 that he had developed deep vein thrombosis after surgery to his knee, and on September 16, 2010, he announced his retirement from all cricket. 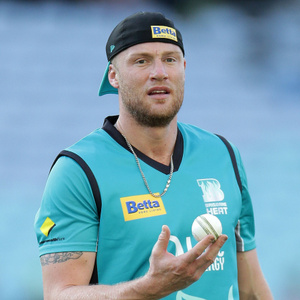