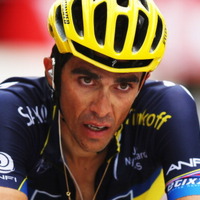 Alberto Contador net worth: Alberto Contador is a Spanish professional cyclist who has a net worth of $17 million dollars. Alberto Contador Velasco was born in Pinto, Madrid, Spain in December 1982. He is one of only five riders who have won all three Grand Tours of road cycling. Contador won the 2007 Tour de France with the Discovery Channel team. He has won the 2008 Giro d'Italia, 2008 Vuelta a Espana, and 2009 Tour de France. He was stripped of the 2010 Tour de France and 2011 Giro d'Italia for a doping offence. After his suspension Contador won the 2012 Vuelta a Espana. His team withdrew from the 2006 Tour de France before a doping scandal began. He was cleared but accused the next year. He tested positive for clenbuterol in 2010 but was cleared by the RFEC. He currently rides for Team Tinkoff-Saxo and has previously been with ONCE-Eroski, Discovery Channel, Astana, and Saxo Bank-SunGard. He has won several time trials and is an all-around cyclist who is adapt at all areas of stage racing. Contador was one of the favorites going into the Tour de France 2014.