Vidya Balan net worth: Vidya Balan is an Indian film actress who has a net worth of $15 million. Born on January 1, 1978, in Ottapalam, Kerala, India, Vidya Balan has established herself as a leading contemporary actress of Hindi cinema. At the age of 16, Balan made her acting debut, landing her first role in the 1995 sitcom Hum Paanch.

After her fruitless attempts to start an acting career, she was forced to act in TV commercials and music videos. It was in 2005, when Balan garnered the first praise for her appearance in Parineeta, and this success was followed with a leading role in the 2006 blockbuster Lage Raho Munna Bhai. Then she portrayed glamorous characters in movies like Heyy Babyy (2007) and Kismat Konnection (2008), but both her performances earned negative comments from critics. However, 2009 marked the start of the most successful period in Balan's career. Her consecutive roles in Paa (2009), Ishqiya (2010), No One Killed Jessica (2011), The Dirty Picture (2011), and Kahaani (2012), earned her the "female hero" attribute and helped her gain a special place among ruling contemporary Hindu actresses. During her turbulent career, Balan has won one National Film Award, five Filmfare Awards and five Screen Awards. She drew attention with her fluctuating weight and poor sense for clothes, but was eventually credited for keeping her individuality and breaking stereotypes of a Hindi film heroine. Apart from acting, she is a social activist and loud supporter of the empowerment of women. She also plays the off-screen role of a wife to film producer Siddharth Roy Kapur. They tied the knot in December, 2012. 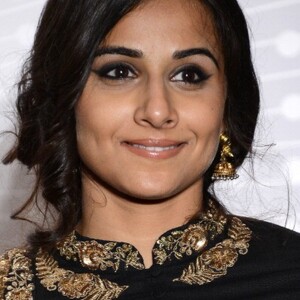