How much is Rishi Kapoor Worth?

Rishi Kapoor net worth: Rishi Kapoor was an Indian actor, film producer and director who had a net worth of $40 million at the time of his death in April 2020. Rishi died on April April 30, 2020 at the age of 67 after a two year battle with leukemia.

Rishi Kapoor was born on September 4, 1952 in Chembur, Mumbai, India. He was the second son of director and actor Raj Kapoor. Rishi made his acting debut in his father's 1970 film "Mera Naam Joker". He played the younger version of his father's character Raju. Kapoor landed his first title role opposite Dimple Kapadia in the 1973 blockbuster movie "Bobby". Then he made a popular pairing with his wife-to-be Neetu Singh in films like "Khel Khel Mein", "Kabhie Kabhie" and "Amar Akbar Anthony".

Rishi Kapoor was the solo lead hero in more than 50 movies, out of which around 11 became major box office hits. He was also often offered roles of a younger brother of the main lead heroes in multi-hero movies, where his romantic character would have a life story closely revolving around the one of the lead hero. In the 1990s, he appeared in hit movies like "Henna" and "Bol Radha Bol", and played the main lead hero in multi-hero films such as :Deewana and Damini – Lightning".

After performing in several box office failures from the mid 1990s, he moved on playing supporting roles in the 2000s. In 1999, he directed the drama "Aa Ab Laut Chalen". In 2000, he played romantic lead for the last time in "Karobaar: The Business of Love", which had a 5-year-delayed release. For the remainder of his career he played supporting roles in movies like "Yeh Hai Jalwa", "Hum Tum", "Fanaa", "Namaste London", "Love Aaj Kal" and "Patiala House". He also appeared in several British movies and had a chance to play himself in the 2009 Ranjit Kapoor's directed movie "Chintu Ji". In 2012, he acted along his brother Randhir for the first time in "Housefull 2". 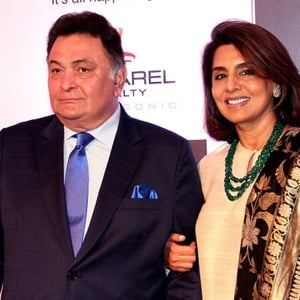