Rajinikanth Net Worth: Rajinikanth is an Indian film actor, media personality, and cultural icon who has a net worth of $50 million. Born Shivajirao Gaikwad on December 12, 1950, in Bangalore, Mysore State, India, he is a true mega-star in India who firmly holds the matinee idol status in the country's popular culture.

Rajinikanth made his acting debut in the Tamil film Apoorva Raagangal (1975). Not only the film won the prestigious National Film Award, it was also produced by K. Balachander, the man to have a profound influence on Rajinikanth's acting as his mentor. After short phase of playing antagonistic characters in Tamil films, he has gradually turned into an established film actor. The hefty sum of 26 crore (US$4.4 million) for his turn in Sivaji (2007) made him the highest paid actor in Asia after Jackie Chan. Rajinikanth's opus includes impressive work in more than 150 films in Tamil, Hindi, Telugu, Malayalam and Kannada film Industry. In almost four-decade-long career, he has won six Tamil Nadu State Film Awards, four Best Actor Awards and two Special Awards for Best Actor, as well as a Filmfare Best Tamil Actor Award. But that's not all, Rajinikanth was also presented with Padma Bhushan, India's third highest civilian honor in 2000. In addition to acting, he has also worked as a producer and screenwriter. 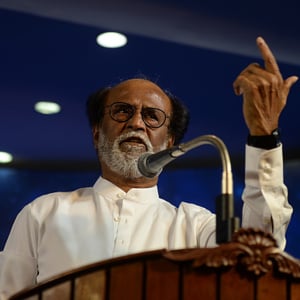