Dharmendra Net Worth: Dharmendra Singh Deol is an Indian actor who has a net worth of $60 million. That is a combined net worth with his wife, actress/politician Hema Malini. Dharmendra has been nominated for Filmfare Best Actor Award several times and has won a Filmfare Lifetime Achievement Award for his contribution to Indian films.

Dharmendra was born in Phagwara, Punjab, India. Dharmendra's early life was spent at the village named as Sahnewal. At the village Lalton in Ludhiana, his father used to work as a school headmaster and later his family shifted to Bombay. His original name is Dharam Singh Deol and he is the one who is better known as Dharmendra.

When Dharmendra was at the peak of his acting career, he was considered the most handsome actor in this industry. He is also one of the lead actors in one of the greatest Hindi movie Sholay which was directed by Ramesh Sippy. In this film, Dharmendra has shared the silver screen in the lead role with the great Amitabh Bachchan. After this, he also acted in several other hit movies. In this way, Dharmendra established himself as a most popular face in this huge industry. 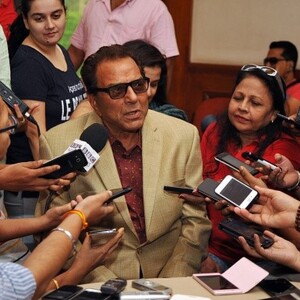