Arshad Warsi net worth and salary: Arshad Warsi is an Indian film actor, dancer, and choreographer who has a net worth of $40 million dollars. Arshad Warsi was born in Mumbai, India on April 19, 1968. By age 14, he was orphaned and struggled for a living. He began working as a door-to-door cosmetics salesman.

After receiving an offer to join Akbar Sami's Dance group, he pursued his dancing career. By the age of 21, he had won an Indian dance competition and fourth prize in a World Dance championship. He went on to start his own dance studio named Awesome. Warsi choreographed the title track of the film Roop Ki Rani Choron K Raja in 1993. As an actor, he starred in the comedy film Munnabhai MBBS in 2003. He has appeared in several films as a supporting actor such as Maine Pyaar Kyun Kiya, Salaam Namaste and Golmaal Returns. Between 2007-2010, Warsi was in several box office successes in movies like F.A.L.T.U, Zila Ghaziabad and Jolly LLB. Munnabhai Chale Delhi his the third Munnabhai sequel in which he is currently working on. Hum Tum Aur Ghost was his first film as a producer. On television, he was the host of Season 1Bigg Boss, the Indian version of Big Brother, and was a co-host of the dance show Razzmatazz. Warsi has been married to Maria Goretti since 1999. The couple have a son, Zeke and daughter, Zene together. 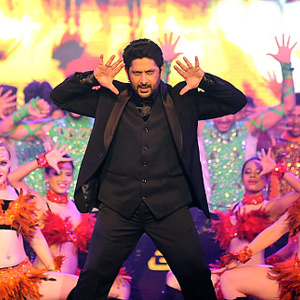