New York soccer fans were thrown a pretty big bone Monday. The New York City Industrial Development Agency (NYCIDA) issued a notice that Yankee Stadium LLC requested $1.04 billion in tax exempt bonds for the purpose of generating a projected 2,647 full-time-equivalent jobs, or the number of jobs at the old Yankee Stadium. Will this money be used to help NYCFC leave their home on Yankee field for greener soccer fields?

The second-year Major League Soccer club team has played its home games at Yankee Stadium despite the field's tight confines. NYCFC's pitch measures 110 yards long by 70 yards wide making it the smallest field in all of Major League Soccer and the smallest allowed by FIFA's international guidelines. Although the players have made the most of the smaller field, Yankee Stadium also has a strange seating configuration and open environment that creates an atmosphere not very conducive to soccer games. 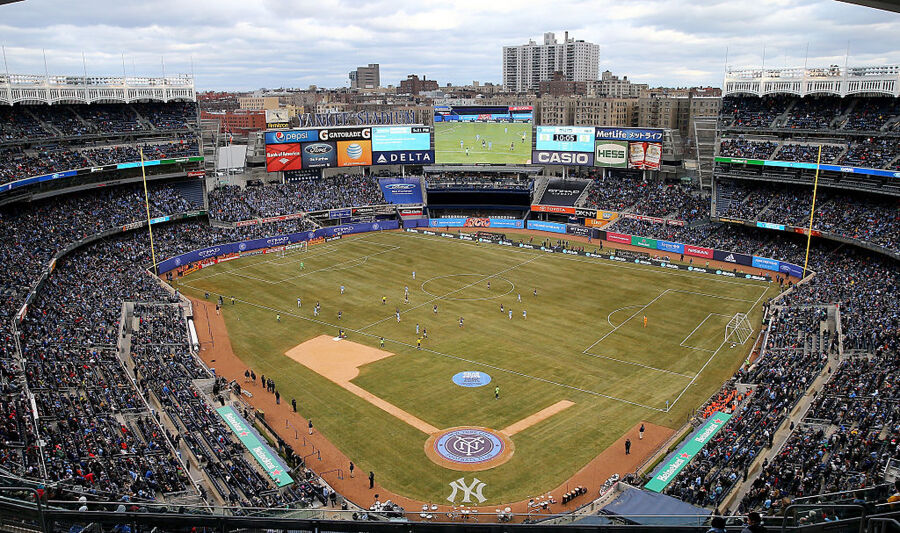 The process of finding a permanent home for NYCFC has not moved as quickly as MLS community hoped. But a few important moves by the Yankees this year have encouraged them to keep their chins up.

In January, the Yankees increased their borrowing capacity from $175 million to $300 million and a source told Sports Business Journal to expect news soon on a new stadium site for NYCFC. In February, Populous, the global architecture firm known for creating soccer-specific stadiums, opened a New York City office. Shortly after the club, emailed season ticket holders asking for their input on a future soccer stadium. In March, Atlas Capital Group, a real estate investment and development firm, purchased a site in Long Island City and rumors flied that it was a possible stadium location. Since the purchase, however, local elected officials have said they would rally against the move.

NYCFC sporting director Claudio Reyna said "positive inroads" have been made toward finding a site, but provided no other update when he spoke to the Daily News in July. NYCFC and the Yankees have also kept silent about the purpose of the $1.04 billion tax exempt bond request. But the amount of money requested in public taxpayer funds and the number of jobs proposed hint strongly at a new stadium.

The NYCIDA will hold a hearing on the proposed financing on September 15th (the day season tickets auto-renew). Members of the public are entitled to review material associated with the request 14 days prior to the hearing (there's a home match scheduled for September 1st). There are plenty of golden opportunities for Claudio Reyna and team president Jon Patricof to make an announcement to the NYCFC's eager fans outside of the boring financing hearing.

With all the signs pointing to a new home for the team, fans will certainly be disappointed if September ends without good news.