Would You Like To Earn $8 Million By The Time You Graduate College? One Football Recruit Is Doing Just That

On July 1, 2021, the NCAA announced a new rule that allowed college players to capitalize (i.e. earn money) on their name, image, and likeness (NIL). This is a groundbreaking move, since college athletes previously weren't able to make money, and could get both themselves and their universities into trouble if they accepted any cash.

We've already seen many players taking advantage of this. Saint Peter's darling Doug Edert (and his mustache) partnered with Buffalo Wild Wings after his team's unexpected run to the Elite Eight. Men's NCAA Tournament champion Kansas (minus coach Bill Self, who makes plenty of money as it is) is touring the state to give all its players some extra cash through autographs, Q&As, and pickup games. Ohio State recruit Quinn Ewers reportedly signed a $1 million NIL deal before stepping foot on campus.

But there's one deal that's going to surpass all of them. 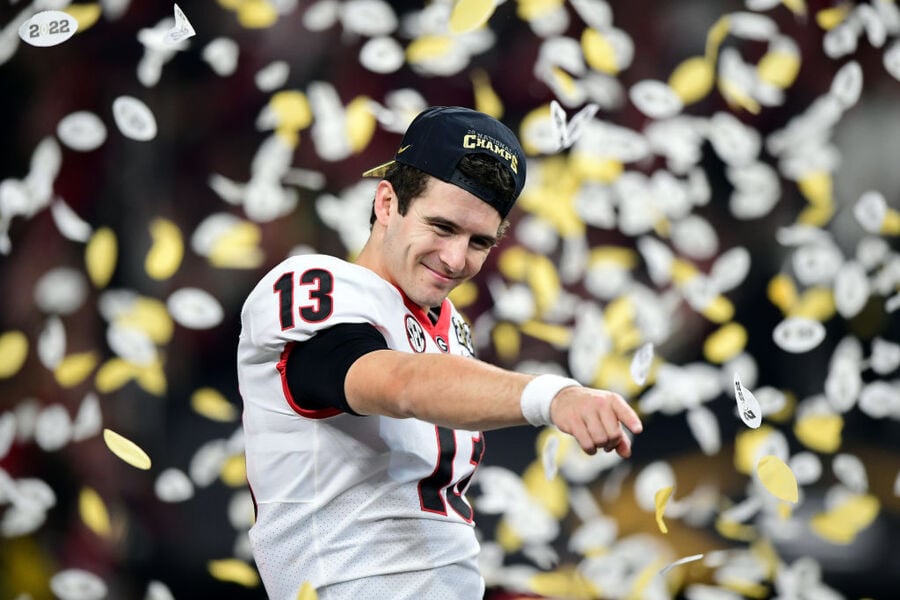 Last month, The Athletic reported an unnamed five-star recruit from the Class of 2023 signed an agreement with a school's NIL collective. Per The Athletic, the deal will pay this recruit $350,000 immediately, with monthly payments equalling more than $2 million per year once his college career starts.

When all is said and done, the recruit will earn more than $8 million. To earn that money, he'll have to be regularly "making public appearances and taking part in social media promotions and other NIL activities 'on behalf of (the collective) or a third party.'"

That's an intriguing prospect for players, but perhaps a terrifying one for universities. It's already tough to police NIL agreements and opportunities. Now, this recruit will start making money as a high school junior and may potentially top $8 million before he's even out of college.

Laywer Mike Caspino, who drafted the contract, was very careful to note this isn't a "pay-for-play" situation. The contract explicitly includes, "nothing in this Agreement constitutes any form of inducement for (the athlete) to enroll at any school and/or join any athletic team." The only requirement is the recruit to be a member of an NCAA school and on the football team.

Though the contract is carefully worded, it could open up a sticky situation for the NCAA. Most NIL deals have been players partnering with brands, much like pro athletes with sponsorship or endorsement deals. But using money to essentially sway a recruit to come to a certain school is more complex. Many players will likely overvalue themselves, while several will probably come up with the short end of the stick.

This deal carries additional risk for both parties. If the player doesn't pan out, he would either have to forfeit his earnings to transfer, or the school would continue paying him while having him ride the bench.

It's a fascinating situation, and as NIL deals become more common, expect to see more wild agreements like this one.