What Are The Worst Contracts In NFL History?

Ever since sports have existed, there have been owners willing to overpay for certain players. And in some instances, they weren't even overpaying. But because of injuries, suspensions, or general malcontent within the locker room, those deals just didn't work out. ESPN recently ranked their favorite worst contracts, and it's not hard to see there are certainly some questionable deals that have been handed out over the years.

However, we're thinking a bit differently in this article: we're looking at guys who were paid handsomely, but just didn't provide enough return on the field, typically in terms of games played. You may think someone like Jay Cutler is vastly overpaid, which is true, but he's still played several seasons for the Bears, and, when you consider their past carousel of quarterbacks, he's actually been a massive upgrade. He wouldn't make this list. But here are seven others who would. Enjoy!

Often when a team gives a player a big contract, even if he ends up being a disappointment, at least the player walks away happy. After all, he's just made a ton of money. But when Haynesworth signed with the Redskins in the summer of 2009, he almost immediately regretted it. In fact, he even came out with an essay detailing his time in the NFL, and admitted he should have stayed with the Titans. But sometimes that big payday has too much allure to pass up.

During his introductory news conference, he claimed "you're not going to remember Albert Haynesworth as a bust." A bold claim, for sure. In 2009, he was passable on defense, recording 29 tackles and four sacks. But then head coach Jim Zorn was replaced by Mike Shanahan, and Washington switched its defense from a 4-3 to a 3-4. Haynesworth had never played in a 3-4 defense, as it's not one that's suited to his skill set. Predictably, he struggled, though he didn't help his cause by missing off-season workouts and minicamps. In his one season under Shanahan, Haynesworth lost his starting job, and only notched 2.5 sacks in eight games. Haynesworth and Shanahan clashed, and even though Haynesworth was let go after the 2010 season, he was still feuding with his former coach through the media as recently as two years ago. The two have called each other just about every name in the book. And yes, one of those names was probably "bust." 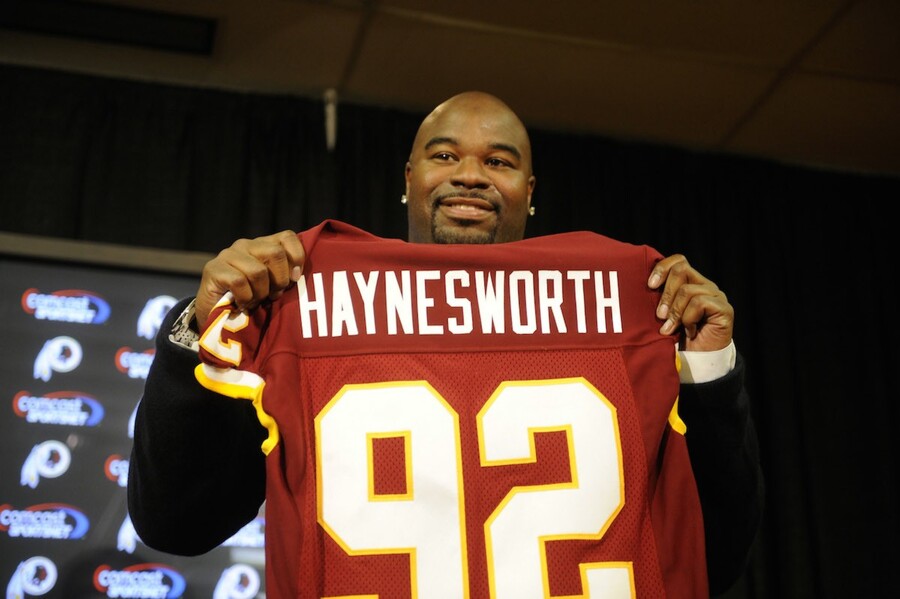 Johnson was a solid defensive end in five seasons with the Bengals, though he never reached the Pro Bowl. That didn't stop the Bucs from offering him a ton of money to anchor their defensive line. That didn't work out nearly as well as planned. A trendy pick to reach the playoffs, Tampa Bay instead went 2-14 and Johnson recorded just 20 tackles in 14 games during an injury-plagued season. The Buccaneers paid him more than $1 million per game. The Bucs released Johnson this off-season, and he's since returned to the Bengals. Naturally, Cincinnati's pass rush ranks in the top five so far this season. Maybe Tampa Bay just has bad luck.

Now, to be fair, not all of this was Walker's fault. In 2008, he was released by the Broncos, and the Raiders came calling with a big payday. Only three months after signing in Oakland, Walker was the victim of a robbery, having $100,000 worth of jewelry, cash and credit cards stolen. He was also beaten and suffered a concussion during the attack. Naturally, then-head coach Lane Kiffin also criticized Walker for his lack of conditioning in the off-season. Being beaten to the point of a concussion probably had nothing to do with that, right?

By the time Walker did make it onto the field, he wasn't much help to a Raiders team devoid of receiving talent. He played eight games his first season, racking up 15 catches for 196 yards and a touchdown before being placed on injured reserve with an ankle injury. Pair that with his history of knee problems, and the once-explosive receiver didn't have much burst left. He played in three more games for Oakland, recording the terrific stat line of one fumble and nothing else in those three contests.

Astute observers may realize Jared Allen is currently a member of the Carolina Panthers. Yet the Bears are going to end up paying him $14.7 million of his $15.5 million in guaranteed money, even after trading him just three weeks into this season. That's a total of 18 games Allen appeared in for Chicago, at a whopping $817,000 per game. And he was hardly the terror on the defensive line that he's been in other stops, amassing 41 tackles and 5.5 sacks while in the Windy City. 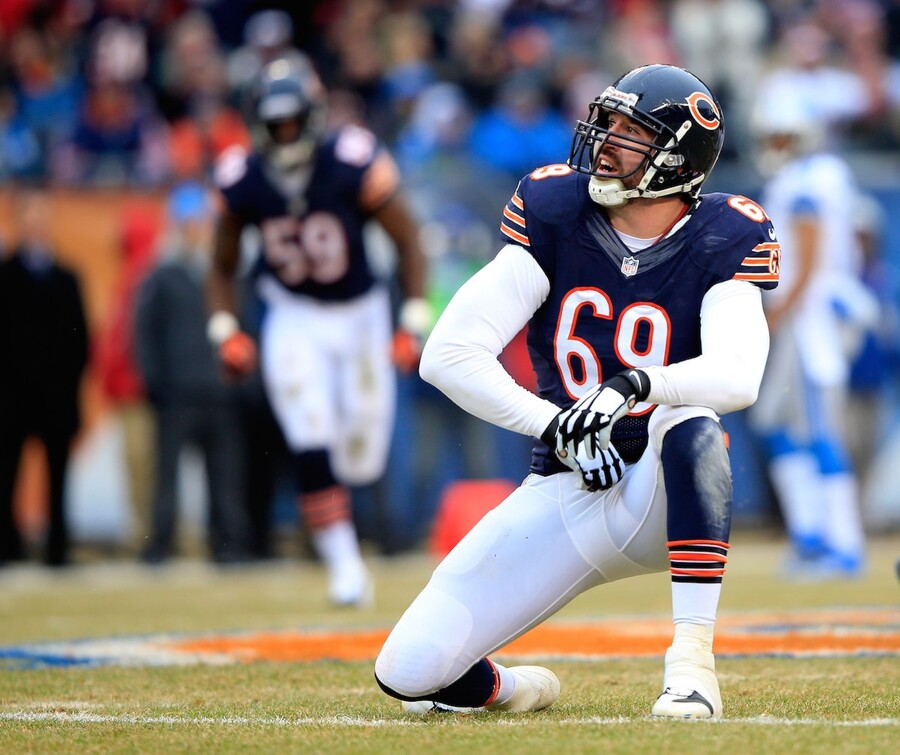 Everyone on this list plays football. Odomes, a cornerback and two-time Pro Bowler with the Buffalo Bills, is no exception. That's why it had to have been incredibly frustrating for the Seahawks, who signed him to a two-year deal in 1994, when he suffered a knee injury during a charity basketball game. That forced him to sit out the entire '94 season. But hey, no worries, right? After a season of rehab, Odomes would be back and better than ever, ready to contribute to Seattle's defensive unit. Except he hurt that very same knee in training camp the following year, and missed all of the '95 season. Yikes.

This one is especially bad because it essentially cost the Redskins two quarterbacks. Despite a middling career to date, George was coming off an impressive season in Minnesota, so Washington signed the 32-year-old to be the backup to incumbent starter Brad Johnson. Then-head coach Norv Turner was set on sticking with Johnson as his starter; after all, Johnson had just come off a Pro Bowl season and led Washington its first playoff appearance in year. Head coach Dan Snyder, who had made all kinds of moves in free agency and the draft to build a strong roster (spending more than $100 million in the process), wanted George to be the main signal caller in Washington.

Things started smoothly enough, with Johnson going 6-3 as the starter before suffering a knee injury. George hopped in and immediately lost his first game as starter. He split the other two games he played in, leaving Washington with a 7-5 record heading into a matchup with the divisional rival Giants. A healthy Johnson returned to his starting role, but he was ineffective, completing fewer than 50 percent of his passes and throwing two interceptions. He was pulled for George in the second half, who performed well in relief duty, nearly bringing the Giants back from a nine-point fourth quarter deficit.

After that game, George was named the starter, and he played well the rest of the season, leading Washington to a championship! Oh no, wait… he completed less than 57% of his passes, threw three interceptions and barely broke 400 yards combined in two games as a starter. The Redskins were outscored 56-16 in those two games. George was benched for the final game in 2000, and the Redskins won easily. The following year, Johnson left for Tampa Bay (and led them to a Super Bowl in his second season), and George lasted just two games before he was pulled as the starter and eventually released by the team. In hindsight, his 1-6 record as Washington's starter should have been expected, since his career record was 46-78. But then again, that's why hindsight is 20-20.

Oh, what a conundrum it is, re-signing an MVP. As we saw with the Bulls and Derrick Rose, when a player is coming off an MVP season, the team is kind of at their mercy. It'd be dumb to let them walk for nothing, and since they'd command such a high salary, it can be difficult to trade them. But when things fall apart, you've committed a lot of time and money for little reward.

Of course, Rose was young and healthy at the time of his contract extension, while Shaun Alexander was 29. Running backs historically have diminished production once they hit 30 years of age, and Alexander was no exception. He racked up 1,880 yards and 27 touchdowns when he won the MVP in 2005. The following two seasons combined? 1,612 yards and 11 touchdowns. Despite an eight-year contract, Seattle let Alexander go after just those two seasons, proving once again that time is a running back's worst enemy.