Winning The Stanley Cup Is Awesome, But It Doesn't Pay As Well As You May Think…

Hockey players insist it's all about hoisting the Stanley Cup. And judging by how much NHL players get paid during the playoffs, that claim looks to be more accurate than a Wayne Gretzky slap shot.

The typical NHL player earns an amazing living. The average salary is now up to $2.58 million. The worst a player can do is make $550,000 a year. With an 82-game season, that means the average player earns nearly $32,000 per game. At worst, a player earns $6,700. It's plenty of money for all the dental work players need.

If a player is fortunate, his team will make the Stanley Cup playoffs. A total of 16 teams qualify. Each series is a best of 7. Without question, it is the most grueling playoff series in all of sports, with players often grinding on the ice with broken bones and torn ligaments. It's toughness many of us simply can't fathom.

Why go through that? It's certainly not about the money. Recent estimates suggest the Stanley Cup winning team splits $3.75 million. The breakdown isn't always precise, but for a 25-player roster, that averages out to $150,000 per player. 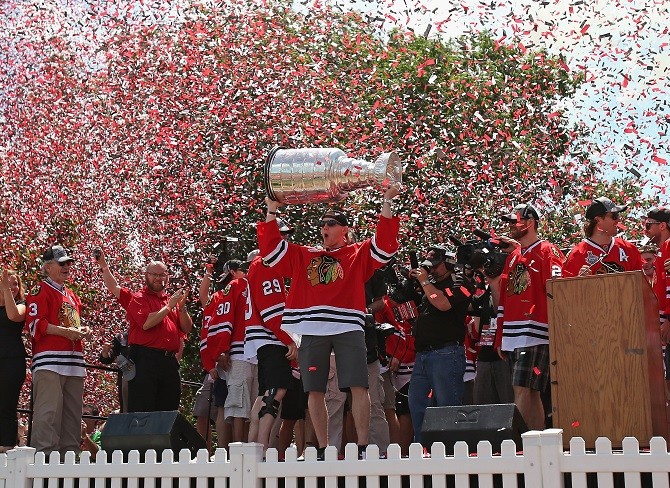 While the average American would take that money in a heartbeat, it's a pay cut for every NHL player. Let's assume each game goes six games; the average game check would be $6,250. That's more than $400 less than the guy making league minimum. If you compare that number to the average NHL salary, it's a discrepancy of $25,000 per game.

The worst case scenario is that a team that loses in seven games during the first round of the playoffs. Those teams get $250,000, or $10,000 per player, or $1,428 per game. That's almost five times less than the average game check for a league minimum player and 22 times lower than the average salary.

The NHL isn't alone in paying players less than a normal game check for playoff work. The NFL, MLB and NBA all do the same thing. But playing 24 games is the equivalent of 30% of an NHL season. Over four years, a player literally adds a year to his career and gets paid a fraction of his annual salary. And let's not even start with the health risks.

It's easy to respect hockey players, their love of the game and ability to sacrifice for a chance at Lord Stanley's Cup. It's not just their bodies and beards that get beat up and grizzled, it's their bottom line as well. The funny thing is, there probably isn't a hockey player on the planet who would trade more playoff money for a chance to win the Stanley Cup.