Who Owns the Kansas City Chiefs And How'd They Earn Their Fortune?

Super Bowl LV is nearly here! The highly anticipated game will see Tom Brady and the Tampa Bay Buccaneers face off against Patrick Mahomes and the Kansas City Chiefs. Patrick and the Chiefs are making a repeat championship appearance after their exciting win over the San Francisco 49ers last year at Super Bowl LIV. The Chiefs are owned by the Hunt family. The team's CEO and Chairman is Clark Hunt. How did Clark Hunt and his family earn their multi-billion fortune which enabled them to own the Kansas City Chiefs today?

The Chiefs have been in the Hunt family since the team began. Back then, they played in the AFL. Oil tycoon H.L. Hunt, Clark's grandfather, turned the family business into an empire. A gambler, H.L. reportedly turned his last $100 into $100,000 in winnings. He then used those winnings to purchase properties, eventually leading to the discovery of the East Texas Oil Field, one of the world's largest oil deposits.

H.L.'s son Lamar (Clark's dad) was one of the co-founders of the American Football League – he's also the person behind the "Super Bowl" name. The AFC Championship trophy is named after Lamar Hunt, so Clark just won an award in honor of his father.

Lamar founded the Dallas Texans in 1960. Within three years, he had moved to Kansas City and renamed the team the Chiefs.

Lamar also created Major League Soccer, as well as the North American Soccer League. Additionally, he co-founded World Championship Tennis. Lamar died in 2006, and Clark has been in charge of the Chiefs ever since. 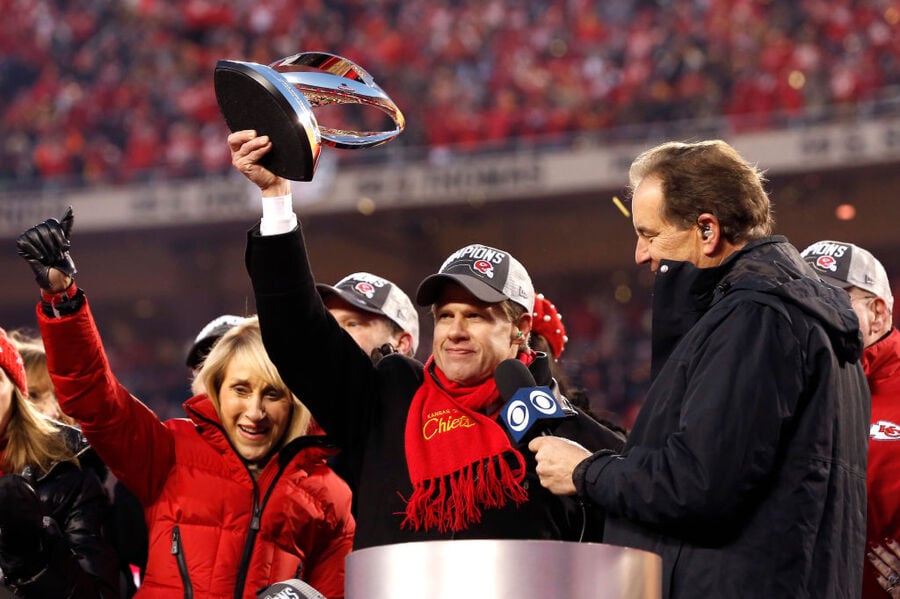 Clark Hunt was born on February 19, 1965, in Dallas. He graduated from Southern Methodist University in 1987 at the top of his class in business school. Upon graduating, he worked as an investment banker at Goldman Sachs. After just two years, he moved back to Dallas to work for his dad. A year before Lamar's death, he granted control of the Hunt Sports Group to Clark, who had recently turned 40 years old.

In addition to the Chiefs, the Hunt Sports Group owns FC Dallas. They previously had a stake in the Chicago Bulls and Columbus Crew. The family's sports empire is worth more than $3 billion, with Clark's personal net worth sitting at about $2 billion.

Collectively, the Hunt family is worth around $16 billion. Their extended family is one of the richest families in the world. And thanks to the 15 children sired by patriarch H.L. Hunt by three wives, the family is extremely extended.

You probably know someone that has a hard time separating their work and home lives. Clark and his wife Tavia embody that – the couple and their three children have a six-bedroom apartment atop the owner's box at Arrowhead Stadium. They also own a home in Dallas.

Prior to last years' win, the Chiefs hadn't won a Super Bowl, since Clark was just four years old.