Unlike player salaries, NFL teams don't have to disclose how much coaches are making. There's not a salary cap or floor for coaching staffs, so teams could theoretically pay as much or as little as they see fit.

That means we don't know exactly what every single coach earns every year. However, we've got intel on more than half of them — 19 of 32 coaches have their salaries publicly available. So, this list has the caveat that it's the highest-paid coaches whose salaries we do know. Here are the top ten.

Since joining the Rams in 2017, Sean McVay has led the team to two Super Bowl appearances and one championship. The team has also never posted a losing record under his reign. McVay talked about possibly retiring after the Super Bowl victory, or perhaps transitioning to a television role. Despite an offer from Amazon worth a reported $100 million over five years, McVay returned to the sidelines with a hefty new coaching deal. While it's unclear exactly how much the Rams paid him, a conservative estimate is $15 to $18 million per year. 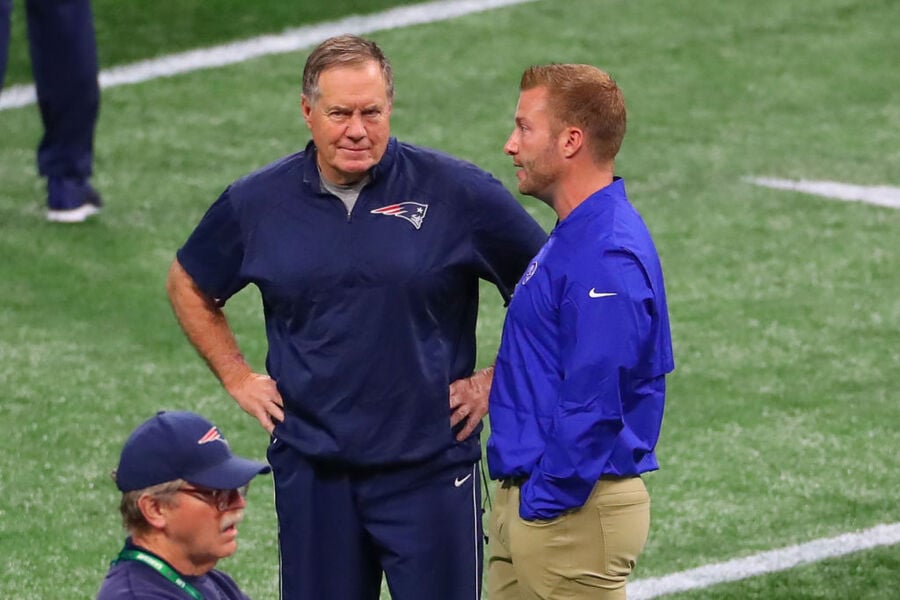 The NFL's undisputed leader in gum chewing, Pete Carroll joined the Seahawks in 2010 after a successful college coaching career at USC. He had early success in Seattle, winning a Super Bowl during the 2013 season and coming within a yard of a second the following year. Since then, the Seahawks have fielded several good teams that have typically reached the playoffs — nine appearances in 11 seasons — but they've never returned to the Super Bowl. Now, the team looks entirely different, but Carroll is still in charge at least through 2025. He's also the league's oldest coach at 71 years old.

Kyle Shanahan was the mastermind behind the Atlanta Falcons offense the year they reached the Super Bowl. We don't need to remind you what happened there (sorry, Falcons fans), but Shanahan proved enough to earn a head coaching gig with the 49ers. He led the team to a Super Bowl appearance in 2019 and came within a field goal of a repeat appearance last season, losing to McVay and the Super Bowl champion Rams.

While his brother Jim returned to college after a brief time in the NFL, John Harbaugh has been one of the league's mainstays. He joined the Ravens in 2009 and the team has only had two losing seasons in that timeframe. Baltimore last won a Super Bowl in 2013 — Harbaugh's only title — but he's successfully re-tooled the team's offensive gameplan around Lamar Jackson.

Frank Reich has been head coach of the Colts for five seasons, though his tenure has been anything but consistent. He thought he was taking the job with a franchise quarterback in Andrew Luck. But Luck abruptly announced his retirement after one season with Reich and the team hasn't had a steady quarterback presence since. Reich has navigated through Luck, Jacoby Brissett, Philip Rivers, Carson Wentz, and now Matt Ryan. The Colts have won about 57% of their regular-season games and have a playoff victory under Reich.

The Panthers gave Matt Rhule a ton of money to leave the Baylor Bears and join the NFL ranks. Rhule's seven-year deal might look rough after a disappointing first two seasons (as well as a slow start this year), but that's kind of been his way of doing things. At the collegiate level, he took Temple from two wins to six wins and then a pair of ten-win seasons before getting the job at Baylor. With the Bears, he went 1-11 and 7-6 in his first two seasons. It wasn't until year three that the Bears went 11-3 and reached the Sugar Bowl. Maybe the Panthers are playing the long game here. Or maybe this situation won't work out quite so nicely. Either way, Rhule will make a lot of money from the Panthers.

As his 16th season in the NFL gets underway — all with the Steelers — Tomlin is dealing with a new quarterback. Longtime QB Ben Roethlisberger retired after last season, so the team has turned to Mitchell Trubisky. Tomlin has never had a losing season as Pittsburgh's coach and has reached the playoffs ten times. He's also won two Super Bowls, but the last one was in 2009. The Steelers are currently in a playoff drought with no victories since 2016.

For a long time, the knock on Andy Reid was that he had very good teams that could never win Super Bowls. And sure, he went 14 years in Philadelphia and six seasons with the Chiefs without much postseason success. But then the Chiefs happened to draft Patrick Mahomes, whose big arm, field vision, and nifty footwork pair perfectly with Reid's offensive strategy. And the combination has been incredibly effective. The Chiefs haven't missed an AFC Championship game in four years, reaching the Super Bowl twice and winning one along the way.

For as long as most football fans can remember, the Bills have been a team of heartbreak. There are the four years of consecutive Super Bowl appearances with zero victories. There are the 17 seasons without a single trip to the playoffs. Yet the Bills are suddenly among the league's favorites to win it all, and a large part of that is the duo of Sean McDermott and quarterback Josh Allen. McDermott has helped revitalize the team and Buffalo has made four postseason appearances in five years.