Which NBA All-Star Team Is Worth More?

The 2019 NBA All-Star lineups are set. West versus East is a distant memory. Team LeBron will square off against Team Giannis. The draft wasn't live, but it was televised, and we got to see exactly when players were drafted.

That leads to a fun exercise: which team is worth more? While we can debate value to individual teams all day long, this is a more analytical approach. We'll look at the current-year salaries of the starters and reserves, then put it all together to see which team has the higher worth. Let's start with Team LeBron's starters.

LeBron James had a pretty sneaky strategy to start – draft players that are free agents this summer. His first three picks could all potentially join a new team next season. Why not the Lakers? LeBron's just doing a bit of networking. It doesn't hurt that Kevin Durant, Kyrie Irving, and Kawhi Leonard are all very good players. Toss in James Harden for a little outside shooting, and Team LeBron has a solid starting five, albeit one that's a little ball-dominant. Their total salary comes in just under $140 million.

After LeBron took Durant, Team Giannis quickly nabbed his Warrior teammate, Steph Curry. At nearly $37.5 million, Curry is the highest-paid player in the league this season. And while Team LeBron is fairly small and quick, Giannis Antetokounmpo is going for length. Joel Embiid and Paul George join Giannis in the frontcourt, while Kemba Walker rounds out the starting lineup selections. Walker is quite the steal – at $12 million, he's the lowest-paid starter by far. 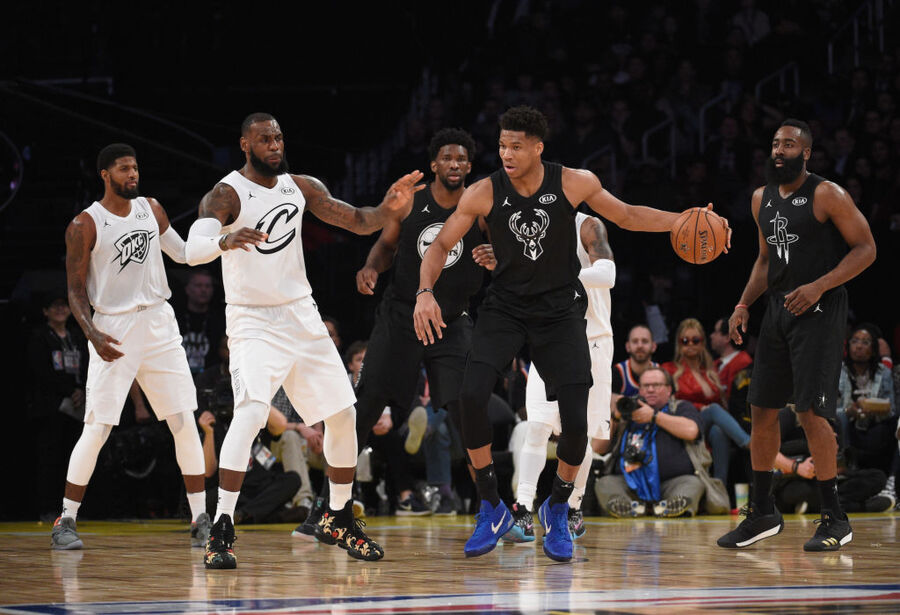 LeBron's first pick of the reserves? Another guy he's trying to recruit to the Lakers, of course. Anthony Davis joins Team LeBron, and he was followed by a pair of scorers in Klay Thompson and Damian Lillard. Ben Simmons provides some much-needed passing – an underrated skill in the All-Star game – while LaMarcus Aldridge and Karl-Anthony Towns offer some big bodies inside to battle against the length of Team Giannis. And in a fitting twist, Bradley Beal was the last pick of the entire draft after saying he didn't care if he was the last pick. He's probably not too upset about it. Each team also gets a "special addition" player; LeBron has Dwyane Wade, who's making less than half of his special addition counterpart. Towns and Simmons are still on their rookie deals, so they don't inflate these numbers too much.

Being the nice guy that he is, Giannis reached with his first pick, taking Bucks teammate Khris Middleton. From then on, he alternated between a big and a wing. First, he went for passing with Nikola Jokic, then all-around hustle with Russell Westbrook. Blake Griffin and his ferocious dunks followed, then D'Angelo Russell's crafty ball handling. Nikola Vucevic and Kyle Lowry bring their overall scoring and savvy to round out the roster. Dirk Nowitzki joins the roster as the team's special addition. Giannis was actually fairly financially thrifty with his first two picks – Middleton and Jokic combined make just a little bit more than both Westbrook and Griffin individually. Will his middle and late spending spree help him overtake Team LeBron in total worth?

LeBron was very even between his starters and reserves. Even with three extra spots on the reserve/special addition side, he came in about $3 million less than the starters. While his squad is more top-heavy, Giannis had some big spending up his sleeve. His reserves are making nearly $32 million than his starters. And that helps put Team Giannis over the top – at least in terms of worth based on salary. We'll see if there's a different story come game time.