Terrelle Pryor last played in the NFL in 2018, though he more recently made headlines after getting stabbed in his apartment. According to reports, Pryor, who was charged with assault due to the incident, looks like he'll recover from his injuries. But he may also never play in the NFL again.

Pryor had one of the more colorful careers of the past decade. The former Ohio State quarterback entered the league on a five-game suspension after selling memorabilia while still in college. He played sparingly his first two seasons before being named the starting quarterback for the Oakland Raiders in 2013. An injury knocked him out for the rest of the year, and he bounced around a few different squads in 2014 and 2015.

After the Bengals – his third team in two seasons, with zero snaps played – released him, Pryor announced he'd be open to playing wide receiver. The Browns gave him an opportunity, and after one catch in 2015, he exploded in 2016.

Pryor played in all 16 games for the Browns, finishing with 77 catches, 1,007 yards, and four touchdowns. Those are solid numbers for any receiver. Pryor finished 27th in catches and 22nd in yardage, ahead of more established receivers like DeSean Jackson, Davante Adams, and Adam Thielen.

Remember, Pryor had only converted to wide receiver two seasons earlier. If he was putting up numbers like that with just a couple of years at the position under his belt, what could he accomplish a few years down the line? 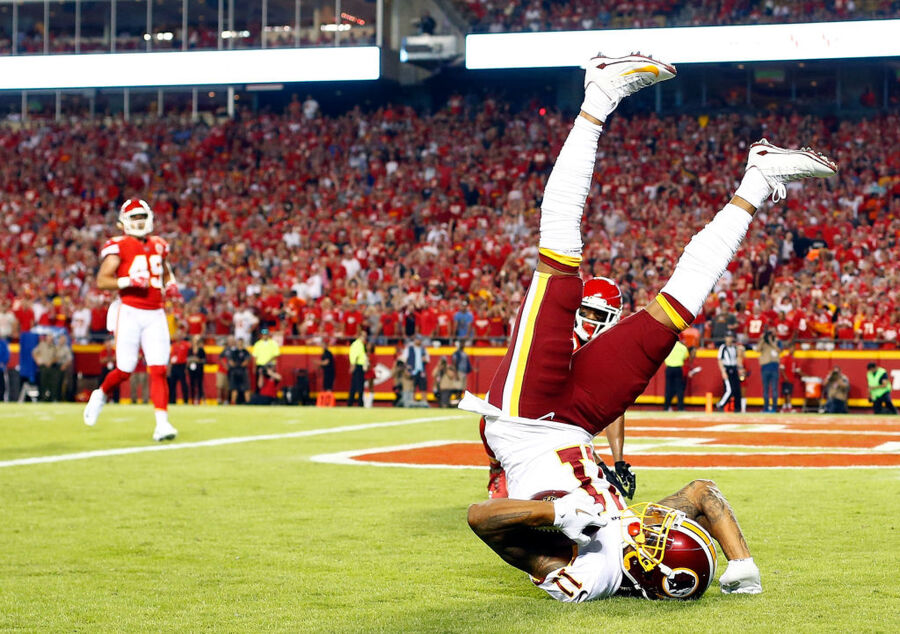 If you asked Pryor that question, he'd tell you he still had plenty of production left. And he bet on himself, turning down multiple offers, including a deal from the Browns reportedly worth more than $30 million over four years.

Instead, Pryor signed with the Washington Redskins, inking a one-year, $6 million deal in the hopes of signing a $60 million contract the following offseason. Unfortunately, that big deal never came.

When Pryor was in Cleveland, the team went 1-15, with Pryor serving as the team's top option on offense. Washington, meanwhile, had several weapons, including Jamison Crowder, Vernon Davis, and Josh Doctson. Pryor, who had 140 targets in 2016, only had 37 targets in nine games with Washington. Midway through the season, he underwent surgery on an ankle injury and missed the rest of the year.

Pryor had an even worse 2018, spending time on both the New York Jets and Buffalo Bills. He totaled just 16 catches and was released by both teams midseason. He hasn't played in the NFL since.

In all, he made about a third of what he was offered from the Browns in 2017. It's possible the 31-year-old Pryor plays again after recovering from his injuries. But it looks like he'll never get that big payday.