Von Miller and the Broncos have until July 15 to strike a deal, or the Broncos risk losing their franchise star linebacker.

Miller, after rejecting an offer of $114 million that would have made him the highest paid defensive player in history at the time, would have to play for the franchise tag amount of just under $15 million if the sides can't agree on a long-term deal. Though several (if not most) teams in the league would be willing to beat the Broncos' offer right this second, the exclusive franchise tag hanging over Miller's head prevents them from doing so.

About a week ago, Miller indicated that there's "no chance" that he'll play for the pennies that the franchise tag has to offer, hoping that the Broncos will be scared into offering him a bigger deal. If they don't come through by July 15, Miller will sit out the upcoming NFL season and be available to the open market after that season is over. At that point, it would be difficult for John Elway and the Broncos to contend with the immense offers that will pour in for the perennial pro-bowler. 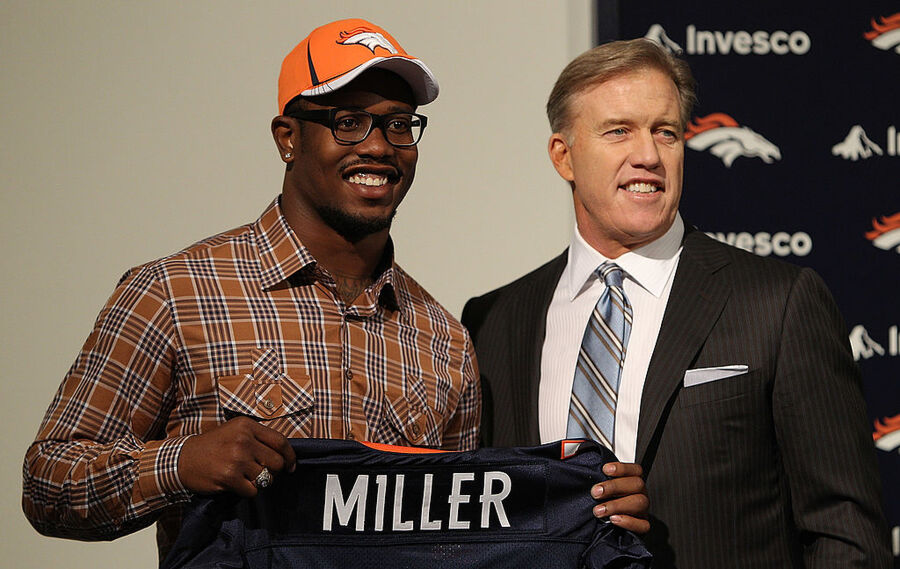 Since declining the initial deal offered by Denver, Miller's prospects have only gotten better. Shortly after rejecting the contract, the Philadelphia Eagles signed Fletcher Cox to a six-year contract that guarantees him $55 million in the first nine-months, and at least $63 million by the end of the term. This deal dwarfed the Broncos' offer, which featured under $40 million in guarantees, and made Cox the highest paid non-quarterback in history.

This past Wednesday, while operating his own camp for kids, Miller declined to comment about the negotiations, believing there was nothing left to say:

"I just think where we're at right now, everything has been said. Everything is already in the books right now. It's just time for waiting right now."

As the weeks pass and the July 15 deadline approaches, members of the Broncos franchise should be shaking in their boots. They're at risk of removing one of the best young linebackers the league has ever seen from action, which would be wise to avoid.

Von Miller, on the other hand? I'd say he doesn't have much to worry about. His Super Bowl MVP performance from last season speaks for itself.